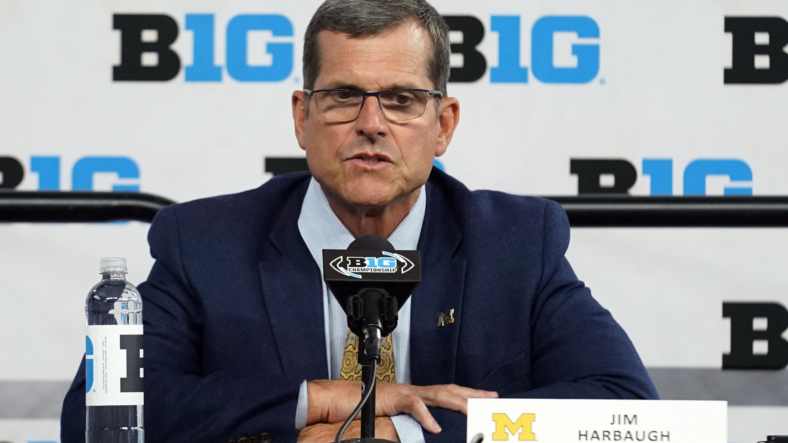 Michigan Wolverines head coach Jim Harbaugh flirted with an NFL return this spring before turning it into a five-year contract extension. Now, one of the highest-paid college football coaches is once again leaving the door open to leaving Michigan.

The Wolverines finally experienced their breakout season in 2021, snapping their losing streak to rival Ohio State and making their first College Football Playoff appearance. While Michigan lost in the CFB Playoffs, many around the program felt confident for the future with Harbaugh seemingly committed to the program.

Instead, Harbaugh looked toward the NFL. He interviewed twice with the Minnesota Vikings and was reportedly on the verge. Suddenly, the Vikings hired Kevin Stefanski and Harbaugh signed a new contract with the Wolverines.

Related: Minnesota Vikings walked away from Jim Harbaugh because of fit

Shortly after signing his new contract, Harbaugh made it clear that it would be the last time he would consider leaving college for an NFL job. It appears that is no longer the case with the 58-year-old now revealing unfinished business at the next level is leaving the door open to an NFL return.

In an interview with Gene Wojciechowski of ESPN, Harbaugh admitted that falling short of winning the Super Bowl with the San Francisco 49ers led him to pursue the Vikings’ job. While his focus is winning a national championship for the Wolverines is his top priority, there is still a desire to win it all in the NFL.

Will Jim Harbaugh return to the NFL?

It’s clear a return to pro football can never be totally ruled out. Even with his new contract extension, the door is always open for Harbaugh to leave if the right opportunity becomes available.

The problem is hiring Harbaugh isn’t a simple decision for an NFL team. He clashes with players and ownership during his stint in San Francisco. While it produced plenty of wins, Harbaugh burned bridges in San Francisco. He took shots at the organization, applauded himself for putting up with them and the hostility seemed mutual.

In an era when NFL owners are learning that empowering head coaches with the ability to build the 53-man roster often backfire, that’s likely what Harbaugh would want. He operates with almost limitless power at Michigan and he would likely expect the same, along with a pay bump, to make an NFL return.

It also seems unlikely that the perfect situation opens up. Jobs typically become available because the team is at the bottom of the standings for years. If Harbaugh isn’t willing to take a job where he needs to be patient, that further limits his opportunities.

No one will be surprised if he flirts with other gigs next offseason, especially if the Wolverines have another excellent season. However, it’s clear he will only accept the perfect landing spot and any situation that meets his wishlist might have better options.