Javier Baez and the New York Mets have put themselves in a unique and multifaceted predicament. During the team’s Sunday afternoon victory over the Washington Nationals, Mets’ players were seen making a thumbs-down gesture after base hits.

In response to a question about the gesture in a post-game press conference, Baez explained that he and Mets players doing a thumbs-down during the game was the team sending a message to the fan base, which has been booing the team as they watch their playoff hopes dwindle.

There are many elements to this situation, all of which paint a negative light on the Mets. Most importantly, though, it tears the fabric of the player-fan relationship of their franchise and potentially sports teams in general.

Prior to dissecting the damage of Baez’ comments, as well as the team as a whole, here’s a factual recollection of how we got to this point.

Below is Baez’ response to a reporter about the thumbs-down gesture (h/t SNY).

Baez’ teammates took to Twitter on Sunday night, defending the infielder and at times engaging with fans. These individuals include Kevin Pillar, Taijuan Walker and Marcus Stroman. Their responses included laughing emojis, retweeting posts in support of Baez and engaging in content about how the media is spinning the situation and fans are in the wrong.

In the interest of fairness, there are other instances in MLB where players have expressed displeasure with fans. Ian Kinsler yelled “f*** you all” after hitting a home run as a member of the San Diego Padres in 2019. He was previously being booed for his play. Then-Detroit Tigers outfielder Tyler Collins flipped the bird to the home crowd in a 180 after they expressed displeasure at him for losing a fly ball in the air.

With those instances and others in mind, Baez and the Mets have a distinct situation.

New York Mets aren’t experiencing something unique with their fans

The art of booing is a subjective matter. On one hand, fans are the game’s consumer, mentally and financially investing their lives in the team. Meanwhile, booing the team one roots for could be construed as being a fair-weather fan, if you will. No matter the side one takes, though, fans have the right to boo.

There is no game without the fans. They pay inordinate money to attend games and are typically corralling an overwhelming fraction of a salary compared to the players on the field.

Nothing that occurred this past weekend or this season in Queens is unique from previous seasons. Mets fans have been booing the team’s shortcomings since the dawn of time. Booing is a part of sports. At times, fans express their displeasure with a team when they’re not playing well. In what way are Mets fans and those of other teams acting any differently than past years and decades?

Over in the Bronx, fans of the New York Yankees express themselves plenty when the team isn’t playing well. Heck, Giancarlo Stanton has been booed relentlessly by the team’s fan base over his four years with the club as much, if not more than infamous star third baseman Alex Rodriguez.

Have you heard Stanton or Aaron Judge tell the fans they have to do better? It sounds funny because it would never happen. This isn’t meant to compare the Mets to the Yankees, rather the two teams play in the same city and have star players.

Fun fact: before the MLB trade deadline, Baez publicly said that he’d love to play for the Mets alongside Lindor, a friend of his. Anyone that plays professional sports knows what large market cities like New York City, Boston, Philadelphia and Los Angeles can come with. New York City didn’t invent booing, which leads to another factor at play.

There are three players that have been spotted doing the thumbs-down gesture: Javier Baez, Francisco Lindor and Kevin Pillar. Baez and Lindor played their entire careers with the Chicago Cubs and Cleveland Indians, respectively, prior to landing in Queens. Why does that matter? The two fan bases don’t have a narrative for being notably verbal with their dissatisfaction for the team’s play in person.

Now, one fan base booing and the other staying silent when the team is struggling doesn’t mean either faithful is more passionate or knowledgeable than the other. They’re merely different environments. Baez and Lindor may be used to silence or at least little booing when they’re slumping, whereas they’re hearing it every week with the Mets.

As for Pillar, he has played with the Toronto Blue Jays, San Francisco Giants, Boston Red Sox and Colorado Rockies. He played for Boston in the 60-game MLB season that saw no fans in the stands for regular season games while the other two franchises are similar to the aforementioned cities.

If this was one person saying that they don’t want to be booed, it would be one thing. Instead, it’s a player and his teammates backing each other up on a statement that tells the fans they’re lacking in sincerity. It really doesn’t get worse than this. That said, is this the start of a much larger conversation?

Baez and Mets’ players didn’t say anything that professional athletes likely don’t think to themselves from time to time. Will individuals on other teams speak out on how they don’t like fans being hot and cold with them and/or back Mets’ players? There’s numerous directions this can go over the coming weeks.

Baez’ comments don’t make him a bad person. In all likelihood, he and everyone that is a part of this situation didn’t mean to offend or anger the fans, especially to this extent. But intent and the way something lands with people are two different animals.

There are certain lines that should never be crossed between players and fans. That includes physically harassing someone in public, as well as saying vile and inhumane things to a player in person or on social media.

Crossing the line, however, is not drunk — or sober — Mets fans yelling F-bombs and booing a team that’s 63-67 in an NL East division they once had control of and are losing to a pair of teams that have either been ravaged by injuries (Atlanta Braves) or are wildly inconsistent (Philadelphia Phillies). Lindor is hitting .224 after signing a $341 million extension. There’s a chance that people aren’t thrilled about that, including the Mets’ organization. 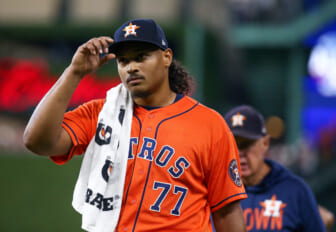 One of the knocks on sports fans from cynical minds is that they can be incoherent or ignorant about the game. While there are certainly people who fall under that category, there are also plenty of people who know what they’re talking about regardless of whether they picked up a bat at a level of organized ball or have just been fans their whole life. Assuming the worst in everybody is the easy cop-out.

Someone who has supported the team for 40 years or is simply a diehard could very well feel like they were told that they’re only allowed to speak when the team is playing well.

No one wants to be booed. Having tens of thousands of people do as such while playing a game isn’t fun, but everyone knows what they’re getting into. For better or worse, it’s a part of sports. Being a star comes with the paycheck, the fame and at times scrutiny.

The Mets messed up, and there’s no apology or restating of the comments that can remove the stench of their remarks. Not everyone will be offended, but many will.

The fans stay for a lifetime. The players and front office have an expiration date no matter how impactful they are.