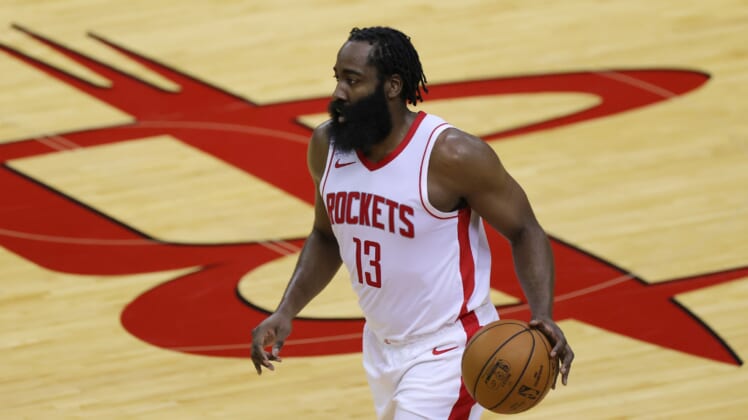 Dec 17, 2020; Houston, TX, USA; James Harden #13 of the Houston Rockets controls the ball during the second quarter of a game against the San Antonio Spurs at the Toyota Center on December 17, 2020 in Houston, Texas. Mandatory Credit: Carmen Mandato/Pool Photo-USA TODAY Sports

Unless you have been quarantining without social media, you know full well the drama that surrounded James Harden and the Houston Rockets.

It was among the biggest early storylines of the NBA season, culminating in Harden being dealt to the Brooklyn Nets in a blockbuster four-team trade earlier in the week.

Harden’s antics in Houston acted as a major backdrop ahead of Wednesday’s trade. That included him requesting a trade from the Rockets, remaining away from the team during training camp and violating COVID-19 protocols to party in both Georgia and Las Vegas.

“When it comes time to show up, he ain’t show up,” O’Neal said. “I know a lot of people in Houston that are glad he’s gone.”

It’s led to an obvious rift between the all-time great scorer and his now-former teammates. It was just recently that Rockets center DeMarcus Cousins blasted Harden following Wednesday’s trade to the Nets.

“Obviously, it’s disrespectful, but everybody has a right to their opinion,” Cousins said Wednesday evening, via ESPN. “We feel a certain type of way about some of his actions. “Just the approach to training camp, showing up the way he did, the antics off the court, the disrespect started way before (Tuesday night).”

Cousins is referencing Harden’s post-game comments following Houston’s loss Tuesday evening, in which the former NBA MVP indicated that the situation in Houston was not salvageable. That was a precursor to the Rockets sending James Harden home Wednesday, mere hours before he was traded to Brooklyn.

As for Harden and his new Nets team, a lot of pressure is going to be on the big three moving forward. Kevin Durant is playing at an MVP level after missing all of last season with a torn Achilles.

Meanwhile, the enigmatic Kyrie Irving remains away from the team due to “personal” reasons. Nets general manager Sean Marks seemingly blasted Irving during a Q&A session with reporters earlier on Thursday. Needless to say, it’s a high-pressure situation for these three stars in the Big Apple.

O’Neal also touched on that in his rant regarding Harden on TNT.

“He got his super team. He has to win this year,” O’Neal continued. “If he doesn’t win this year it’s a bust.”

It’s going to be interesting to see which way the wind blows in Brooklyn moving forward on the season. First-year head coach Steve Nash has a major test. Three big-time egos sharing one ball, two of them in Harden and Irving finding themselves the topic of major drama this year.

The backdrop here is a Nets team that pretty much gave up the farm to acquire James Harden. If it doesn’t pan out, the drama we’ve seen unfold will likely be taken to a whole new level.