A change of scenery may have been the best thing to ever happen to James Harden if his debut with the Brooklyn Nets on Saturday was a sign of what's to come. 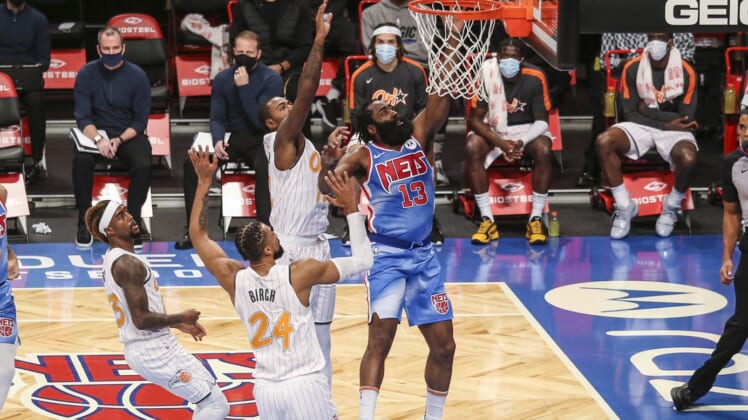 The Brooklyn Nets took the court on Saturday against the Orlando Magic for the first time with superstar guard James Harden in the lineup, and for the most part, he didn’t disappoint at all in his debut.

Although Harden was rather erratic and obviously needs some time to sync up with the rest of his new teammates, he formed a phenomenal tandem alongside Kevin Durant in Brooklyn’s 122-115 win, which should have fans of the team very encouraged.

Despite something of a slow start, Harden eventually picked up his play as Saturday’s contest wore on, racking up 32 points, 12 rebounds and 14 assists. He overcame a slow scoring start by feeding Durant early and often, and eventually hit eight of 18 shots from the field, three of 10 from 3-point range and sank 13 of 15 free throws.

Toward the end of his time with Houston, a passive Harden was clearly sacrificing his shot in favor of being passive on offense, clearly a sign he was disgruntled and didn’t want to play with the Rockets anymore. However, he was definitely not showing that type of form for the Nets, willingly making the proper play to get his teammates involved — even sometimes to a fault.

When on some plays it seemed like Harden would’ve been better off doing what he does best and scoring the ball, he wound up coughing the rock up. The eight-time All-Star finished the night with a whopping nine turnovers, which is part of the reason Orlando was able to remain within striking distance until late in the fourth quarter.

Losing that many possessions can be chalked up more to chemistry issues and getting a feel for his new surroundings than Harden being particularly reckless or careless with the ball.

James Harden bought in on defense for Brooklyn Nets

In the first half alone, Harden showed a commitment on the defensive end rarely seen during his tenure with the Houston Rockets. He blocked a shot and logged three of his four steals on the evening in 19 minutes of opening half action, helping Brooklyn to a narrow 52-50 advantage.

That compensated for Harden’s cold start from beyond the arc, as he bricked his first four treys as a Net.

Having led the NBA in scoring for the past three seasons running, it’d be expected for Harden to check out as he often did in Houston when he was having an off shooting night. The fact that he’s already contributing in other areas in an exceptional way bodes well for his future in Brooklyn.

Granted, Harden still has plenty to prove in that regard. What happens when real adversity hits this talented squad? Will he be able to maintain that same energy, particularly under a first-year coach in Steve Nash? We shall see.

Speaking of that adversity: While Irving continues to work his way back — he was expected to be in action against the Magic, but wasn’t — it’s at least confirmed that Harden and Durant have hardly missed a step from their days in Oklahoma City, where both started their NBA careers.

Durant was dynamic playing off Harden all night, lighting up Orlando’s defense for a game-high 42 points. What could that mean for Irving’s future?

Given the fact that Durant is perhaps the most versatile pure scorer to ever play, it makes sense that Harden would adapt. The latter’s game in Houston was predicated on isolation and clearing out to either create off the dribble or shrug off defenders for separation before 3-point attempts.

It’s great how Harden seems to already be reconnecting with Durant in a real way. However, Irving is the big wild card here. Will he act all petty and jealous that Harden and Durant are reviving their Thunder chemistry, and is Harden still going to be able to function as a pure point guard with Irving playing off the ball?

Irving didn’t want to keep playing with LeBron James and the Cleveland Cavaliers, even though he was the clear No. 2 option on the squad and won a championship. Based on how strong Harden looked was on Saturday, it might’ve actually worked against Brooklyn’s hopes of getting Irving back and fully committed to the team.

On the other hand, if Irving leaves, it appears as though the Nets would be fine — and perhaps thrive — without the obvious distractions he’s created.

Here are some of the best real-time reactions from around the NBA to Harden’s Nets debut as it unfolded: