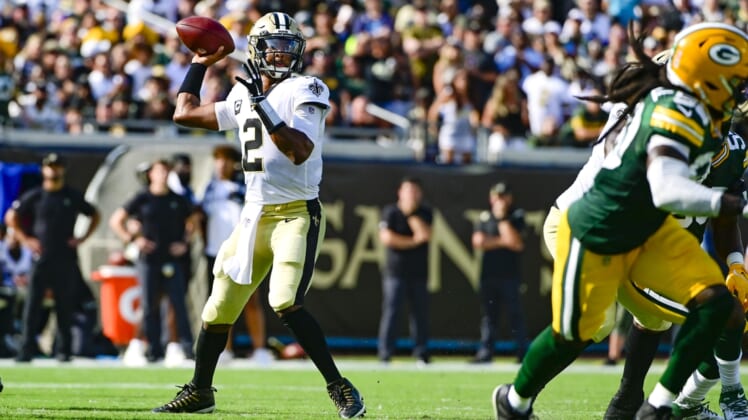 Jameis Winston tied a career-high with five touchdown passes and New Orleans intercepted Aaron Rodgers twice in the Saints’ 38-3 victory in the season opener for both teams Sunday in Jacksonville, Fla.

Winston made his first start for the Saints in the wake of Drew Brees’ retirement after a 15-year tenure and passed for just 148 yards, but he completed 14 of 20 with no interceptions in a much more efficient performance than reigning MVP Rodgers had.

Rodgers completed 15 of 28 passes for 133 yards and a 36.8 passer rating before being replaced by Jordan Love in the fourth quarter.

The game was moved to Jacksonville from the Caesars Superdome after Hurricane Ida damaged New Orleans two weeks ago. The Saints have practiced in the Dallas-Fort Worth area since canceling their preseason finale.

With Green Bay trailing 17-3 coming out of halftime, Rodgers drove the Packers to the Saints’ 9 on the first possession of the third quarter, trying to pull within a touchdown. But Saints rookie Paulson Adebo intercepted at the 7-yard line and returned it out to the Saints’ 40.

After the Packers defense held, Rodgers threw another interception on the ensuing possession, with Marcus Williams intercepting a deep pass and returning it 53 yards to the Packers’ 12.

That led to Winston’s 10-yard touchdown pass to Chris Hogan and a 24-3 Saints lead after three quarters.

Winston added an 8-yard touchdown pass to Juwan Johnson and a 55-yarder to Deonte Harris in the fourth quarter.

The Saints received the opening kickoff and drove to Aldrick Rosas’ 44-yard field goal for a 3-0 lead at the end of the first quarter.

On their second possession Winston threw a 3-yard touchdown pass to Alvin Kamara for a 10-0 lead.

On their third possession Winston converted a fourth-and-7 with a 12-yard completion to Johnson on the way to a 1-yard touchdown pass to Johnson on another fourth down for a 17-0 New Orleans lead.

To that point the Packers had run just 12 plays in two possessions. Rogers drove them 54 yards in six plays and Mason Crosby made a 39-yard field goal as time expired to cut New Orleans’ lead to 17-3 at halftime.