Jake Paul open to WWE tag team with brother Logan Paul: ‘We could become the champions’

While Jake Paul is pretty busy in his burgeoning career as a boxer, there is definitely the possibility he could eventually join his brother Logan Paul in the WWE ring someday.

The elder of the Paul brothers made headlines last week when he revealed to his millions of followers on social media that he had come to terms with WWE on an exclusive long-term deal to join the top wrestling promotion’s roster on a part-time basis.

The news wasn’t necessarily shocking since Paul had made several appearances for WWE over the last couple of years, including a well-received first foray into an actual match at this year’s Wrestlemania spectacular. Yet, the decision was still a surprise for the uber-popular YouTuber to tie himself to such an in-depth obligation for the foreseeable future.

While Logan Paul has kept busy with various projects, his brother Jake has worked hard to turn himself into a legitimate star in the world of boxing over the last few years. Certainly, his resume of foes could be knocked but there is no doubt the 25-year-old has brought a new audience to boxing and gained the respect of a few sweet science legends, including Oscar De La Hoya and Mike Tyson.

Jake Paul is set to return to action on Aug. 6 inside Madison Square Garden and has been doing the media rounds for his upcoming clash with veteran boxer Hasim Rahman, Jr. On Tuesday, one of his stops included “Carton & Roberts.” A popular afternoon radio show on New York’s WFAN Sports Radio 101.9 FM/66AM New York. 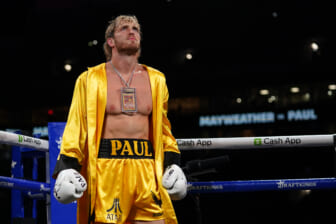 Along with talking about his bout inside “the world’s most famous arena,” the hosts asked Paul about the possibility of joining his brother in WWE. Both are perfect fits for the highly athletic and fictional world Vine McMahon has created, especially Jake. And it seems the Ohio native is open to the idea, just not right now.

Paul vs Rahman, Jr. will air exclusively on Showtime pay-per-view on Aug. 6.