There are many people within the combat sports realm that doubts the talents of YouTuber turned pugilist Jake Paul, however, the 25-year-old has a supporter in boxing legend, and promoter, Oscar De La Hoya.

Paul has been a sensation during his two-plus years as a professional prizefighter. In that short span, he has become one of the most well-known competitors in the industry as he brought his millions of social media followers with him and added new fans by scoring knockouts in four of his five fights. Nevertheless, with wins over other social personalities, a former NBA player, and two well-aged MMA stars he has many detractors that believe he has been a protected athlete with little real boxing skills.

However, Oscar De La Hoya — one of the greatest boxers of the 1990s and a top fight promoter in the business currently — has a lot of respect for Paul. He has also been hearing good things about the Ohio native’s dedication to the fight game. That, matched with the raw talent he has shown thus far, has sold “The Golden Boy” on the fact that Paul is for real and is good enough to beat world-class boxers right now.

Related: Ryan Garcia next fight: Who will face ‘King Ry’ in return?

Jake Paul has a fan in Oscar De La Hoya

“Let me tell you one thing about Jake Paul. He’s the real deal. With only four or five fights, and the way he’s taking it serious. And I dare anyone who has boxing experience, who has MMA experience to call him out, because I’ll tell you one thing, this guy can beat a lot of good champions, and maybe even great champions,” De La Hoya told TMZ Sports on Tuesday. “So Jake Paul is on to something because he’s taking it serious. This is not a one-off, two-off, three-off, no, he wants to become a world champion.”

Could Paul win a boxing title in the near future?

Much of Paul’s haters come from the fact that his fanbase has followed him to boxing and helped him make the sort of paydays that are completely uncommon for a fighter at this stage of their career. That is another element of Paul’s overall package that De La Hoya also appreciates, and he believes the haters need to knock off that talk because, in the end, the talent and fanfare Paul brings is a plus for the industry, the 49-year-old boxing Hall-of-Famer says. 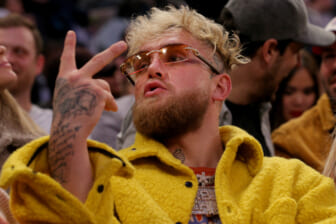 Also Read:
Jake Paul next fight: Who should get ‘Problem Child’ next?

“He’s on his way to becoming a contender, he’s on his way to becoming a world contender, then a world champion. If he keeps it up,” said De La Hoya. “All the social media stuff, everybody wants to be him. Everybody wants followers, everybody’s on social media. What’s wrong with him having 19+ million followers? There’s nothing wrong with it an it’s actually wonderful for the sport. Enough with that BS. Let him be. He’s doing the right thing. He’s great for boxing and I really hope he does become world champion.”

Paul last fought in December. Beating former UFC welterweight champion Tyron Woodley by sixth-round knockout in a rematch from their bout five months earlier. He is expected to return to action this summer against a yet to be determined opponent.