Although the majority of marquee NFL free agents have already signed, there are several big names remaining on the open market still searching for new teams.

Let’s take a look at some of the best players still available and find ideal landing spots for them.

Dating back to 2014, with the exception of an outstanding 2017 draft class, there have been very few first-round cornerbacks who’ve stepped in and been immediately ready to play at a high level. That’s what Carolina is asking eighth overall pick Jaycee Horn to do as of now: Be a No. 1 cornerback as a rookie.

Horn has a tantalizing skill set, but facing such tough competition in the NFC South, he may have a hard time as a grabby, press-heavy coverage player. That’s where someone like Richard Sherman would be an invaluable mentor.

First of all, the Panthers have really liked to play zone under defensive coordinator Phil Snow. Since Horn doesn’t really fit that philosophy and lacks any NFL experience, having a savvy, zone-centric veteran in Sherman is a dream scenario for Carolina.

Sherman is bound to command a decent payday given his track record, and even though the future Hall of Famer has maybe lost a step, he’s still one of the smartest, most instinctive corners in the league. He’d add a lot to the Panthers’ defensive backfield.

A big caveat: Fitzgerald may well retire, but for purposes of this exercise, we’re assuming he gives it one more go.

Signing Sammy Watkins in free agency and drafting Rashod Bateman and Tylan Wallace were great moves to supply Lamar Jackson with more weapons in the passing game. That said, Watkins isn’t exactly the mentor type, and Baltimore is asking a lot of a trio of young players, including former first-rounder Marquise Brown.

Since Brown hasn’t lived up to the hype, and Bateman and Wallace could use a player at their position to show them the ropes in the NFL, who better than Fitzgerald?

After so many years with the Arizona Cardinals, it’d be neat to see Fitzgerald get a change of scenery. He’s not a great scheme fit in the desert anymore, and there wouldn’t be a lot of pressure on him to be the go-to guy in the Ravens’ run-heavy offense.

Fitzgerald would function more as a coach on the field for a potential Super Bowl contender who could contribute clutch catches on key downs. He still has excellent ball skills, hands and route-running ability.

With speedsters like Watkins and Brown flanking him, Fitzgerald could carve out a solid niche role in Baltimore, allowing Wallace to organically develop and be readier to contribute in 2022. You can’t expect too much out of a rookie fourth-round pick.

Ingram’s former Los Angeles Chargers teammate in safety Rayshawn Jenkins signed with the Jaguars this offseason, and maybe he could recruit the three-time Pro Bowler to Duval County.

Sad to say, but K’Lavon Chaisson looks like a mere situational pass-rusher right now. He was one of Jacksonville’s 2020 first-round picks and didn’t really pop at all as a rookie.

Pairing someone like Ingram with a viable pass-rusher in the Jags’ Josh Allen would give this defense a necessary, added dimension. The offense should be much improved with No. 1 overall pick Trevor Lawrence at quarterback, but if Jacksonville wants to maximize its chances of an instant turnaround, it still needs defensive help.

A one-year, prove-it deal is fantastic for both sides. Ingram would provide instant value in filling a need at a key position. Meanwhile, the Jaguars can also offer him the most money with their league-high salary cap space. 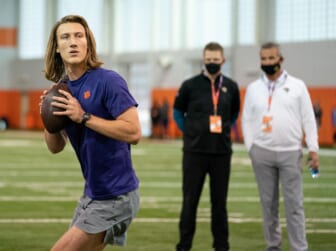 One of the wild cards among remaining NFL free agents, Fisher is a former No. 1 overall pick who’s coming off a torn Achilles in the AFC Championship Game. The Kansas City Chiefs aren’t bringing him back, but any team could always use a solid left tackle.

Considering Indianapolis has already visited with Fisher, it’d make sense for the sides to ultimately strike a deal. The implication from The Indianapolis Star insider Jim Ayello is that an accord between the Colts and Fisher could soon be coming:

There’s a huge need at left tackle for the Colts, and new QB Carson Wentz badly needs better pass protection after struggling in 2020 with a patchwork offensive line in Philadelphia.

Reuniting Wentz with Frank Reich will only go so far in building goodwill. It’s more about what general manager Chris Ballard surrounds Wentz with that’ll determine whether or not he succeeds. Fisher could be a big piece to the puzzle, and whenever he’s healthy enough to play, he’d be knocking off the rust next to an All-Pro guard in Quenton Nelson.

A diminished role with the Cincinnati Bengals this past season seemed more to do with the team wanting to get younger players reps than Atkins’ own shortcomings.

No, Atkins isn’t in his absolute prime anymore as he approaches his age-33 season, yet he still has some juice as an interior pass-rusher in the right situation — namely with a Super Bowl contender like the Bills.

Atkins played only 119 defensive snaps in 2020, so he’s bound to be fresh. Every year before that dating back to 2010, he performed at an elite level. Hardly reason to give up on his NFL career just yet, especially given the dire state of the Bengals’ front seven.

Buffalo spent its first two draft picks on Gregory Rousseau and Carlos Basham Jr. in an effort to boost its pass rush. They both have inside-outside versatility, but again, counting on either of them to be immediately effective anywhere across the defensive line is almost pipe dream.

Since Ed Oliver hasn’t really delivered as the 2019 draft’s ninth overall pick at defensive tackle, Atkins can possibly help push him to realize his potential and teach him some of the finer points of the position. Atkins’ presence could also free up Rousseau, Basham and the Bills’ other edge defenders to get after the quarterback.

GM Brandon Beane would have to restructure some contracts to make room for Atkins and his whole rookie class, but it’d be well worth it.