Smith, a two-time Pro Bowl selection, missed a majority of the 2021 season with a back injury. He dealt with the issue throughout training camp last year, playing just 16 snaps in Week 1 before landing on injured reserve.

Green Bay activated the 6-foot-4 edge rusher before the NFL Divisional Round game against the San Francisco 49ers. Fully healthy, he recorded one sack and one quarterback hit. Following the loss, Smith seemingly acknowledged his time in Green Bay was over. 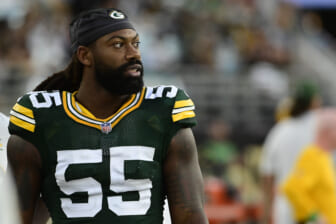 Originally signed to a four-year, $66 million extension in March 2020, Smith blossomed into a star with the Packers. He made the Pro Bowl in each of his first two seasons and earned second-team All-Pro honors in 2020.

Following the departure of Za’Darius Smith, the Packers will likely target an edge rusher with one of their top picks in the 2022 NFL Draft.