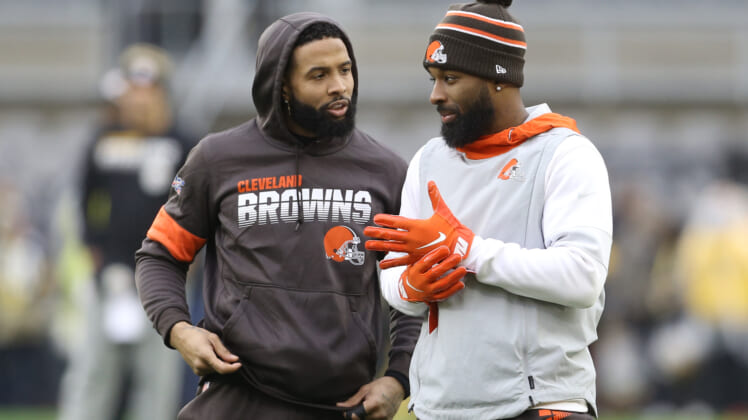 One NFL insider, Ian Rapoport, suggests a simple solution to boost the cast Aaron Rodgers currently has to work with in a Tuesday appearance on the Pat McAfee Show. Rapoport notes the quantity of quality veteran receivers who still remain available in free agency, specifically name-dropping the three wideouts listed above.

While Rap didn’t have any specific intel tying the Packers to the star receivers, he did say he “thinks” the franchise will get involved and could interest each of them more, knowing they’ll have a chance to compete for a Lombardi Trophy.

What could OBJ, Jarvis, or Julio offer AR12 and the Pack?

Even though all three players are on the back nine of their careers, each comes with over eight years of NFL experience in addition to having at least 500 career receptions a piece.

If Rodgers appreciates experience, he’d be overjoyed to have any of the three players.

One of the reasons each of the players hasn’t been offered a large contract to this point may be due to their injury concerns. OBJ is coming off an ACL tear. Landry’s coming off a partial quad tear and MCL sprain, injuries that appeared to impact him all season. Jones has played in just 19 games the past two years due to hamstring issues.

There’s no question the players are great route-runners, which would seem to make them perfect fits for Rodgers. From the players’ perspectives, Rapoport nailed it, who wouldn’t want to play with the reigning NFL MVP?

Chances are any of the three would leap at an opportunity to catch passes from Rodgers in 2022. Maybe they’re holding out for a bigger bag, or maybe teams just aren’t convinced on their medical outlook. It’s not like any of the three have been continually linked to interested teams.

The Packers may even prefer to wait and see how their corps looks during OTAs which are scheduled to begin later this May on the 23rd.