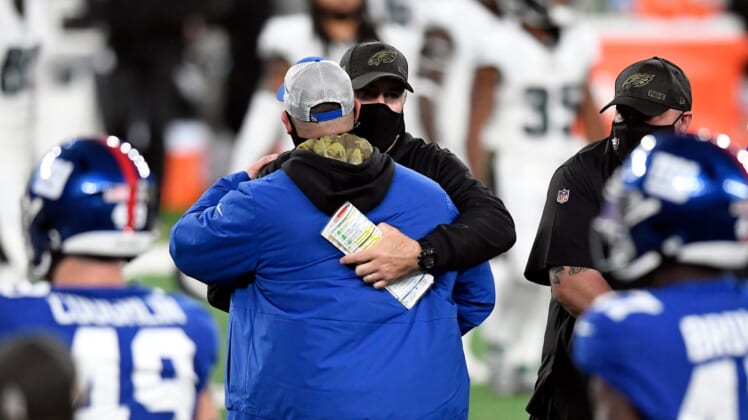 Joe Judge and the New York Giants took care of business against the Dallas Cowboys Sunday afternoon, setting the stage for a six-win team to potentially win the NFC East. Philadelphia Eagles head coach Doug Pederson had other ideas.

Already eliminated from playoff contention heading into Sunday night’s matchup against the Washington Football Team, an Eagles win would have handed New York the division. Instead, Doug Pederson opted to go into full-scale tank mode.

His in-game coaching decisions also made it clear that Pederson was in it to lose it. In the end, Philadelphia dropped the game by the score of 20-14 to move up to the sixth overall pick in the 2021 NFL Draft. It was not met by a ton of support throughout the gridiron world. That now includes New York Giants first-year head coach Joe Judge.

“To disrespect the game by going out there and not competing for 60 minutes to doing everything you can to help those players win, we will never do that as long as I’m the head coach of the New York Giants,” Joe Judge told reporters.

To be fair, Joe Judge is 100% correct with this sentiment. All 32 NFL teams and its players went through hell and back to conduct the 2020 season amid the COVID-19 pandemic. Sacrifices were made. Families were left without their loved ones for the long haul. It was a sacrifice to make sure the season went on as planned.

However, it also must be noted that a six-win team relying on a four-win team to defeat what was then a six-win team in order to capture a division title is not an ideal scenario. If the Giants had taken care of business in one-score games this season rather than posting a 5-5 record, Joe Judge would have had nothing to gripe about.

As for Doug Pederson, he will apparently return to the Eagles following a disastrous 4-11-1 season. The head coach knew that full well when he opted to go into full-scale tank mode against Washington Sunday night.

In no way is this going to make Doug Pederson many fans around the football world. Tanking in the middle of a nationally broadcast game that the NFL hand-picked to be its “Sunday Night Football” finale isn’t going to sit well within the league’s power structure in New York City. That’s for sure.

As for Pederson, he likely has one more season to prove himself to the Eagles’ brass. The head coach’s handling of the Carson Wentz situation coupled with a second consecutive down year is not going to guarantee him anything beyond the 2021 NFL season.

Related: NFL head coaches on the hot seat in 2021

Whether Sunday night’s decision to tank changes the Eagles’ thought process relating to Doug Pederson remains to be seen. We’ll find out here within the next several days. For now, Pederson has not made himself many friends around the NFL world.

That includes Joe Judge, who ripped on the head coach without even mentioning his name. Talk about shade-throwing in the most brutal of ways.