[brid autoplay=”true” video=”745868″ player=”23231″ title=”3%20reasons%20why%20Joe%20Flacco%20to%20the%20Philadelphia%20Eagles%20made%20perfect%20sense” duration=”79″ description=”Joe Flacco is no longer a starter-caliber quarterback in the NFL. That time passed a good half-decade ago. In no way does this mean Flacco can’t be a quality backup for a young signal caller.It appears that the Philadelphia Eagles have come to this conclusion. According to Flacco’s agency, the Super Bowl quarterback has signed with Philadelphia. He will be second-year quarterback Jalen Hurts’ primary backup after the Eagles traded Carson Wentz earlier in the offseason.Flacco, 36, last suited up for the New York Jets in 2020. He started four games for the team, throwing for 864 yards with six touchdowns and three interceptions. Prior to that, Flacco spent one season in Denver following a solid 11-year career with the Baltimore Ravens. Below, we look at three reasons why Joe Flacco to the Philadelphia Eagles makes sense.” uploaddate=”2021-03-24″ thumbnailurl=”//cdn.brid.tv/live/partners/17660/thumb/745868_t_1616601839.png” contentUrl=”//cdn.brid.tv/live/partners/17660/sd/745868.mp4″]

Although the Eagles lack some leverage since everyone knows they want to part with the three-time Pro Bowler, ESPN’s Jeremy Fowler reported Tuesday that Philadelphia will only release Ertz as a last resort:

That last bit of Fowler’s brief report is intriguing, because at least a few teams are already engaging in talks to acquire Ertz.

Given that Ertz has meant so much to the Eagles organization and was a key member of the team’s run to Super Bowl LII, general manager Howie Roseman will probably do all he can to trade the 30-year-old veteran out of the NFC.

So given those circumstances, let’s focus on a few AFC suitors who could be in the Ertz market, especially since it shouldn’t cost anything more than a late Day 2 or Day 3 draft pick.

We all know Tim Tebow is trying to make a comeback in the NFL as a tight end. Urban Meyer is the main reason Tebow is getting an opportunity in the first place, but it’s also in part because the Jaguars lack a legitimate starter at the position.

Ertz would easily be atop the depth chart upon setting foot in Jacksonville. Being part of a complete culture change under Meyer, with the chance to play with No. 1 overall draft pick Trevor Lawrence, might be factors that make Duval County an appealing destination for Ertz, too.

It’s really hard to pinpoint how the Jags will fare under Meyer in Year 1. How quickly Lawrence adjusts to the pros will go a long way in determining that. If he had a security blanket like Ertz to throw to, perhaps Jacksonville’s offense could be much better than people expect.

One more element to consider: Jacksonville still has the most cap space in the NFL, so if Ertz wants to maximize the earning potential for the rest of his career, the Jags might be the team to do it with. 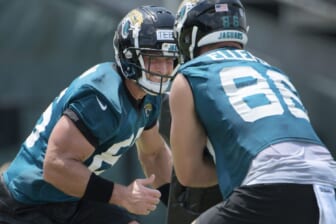 Zach Ertz could reunite with Carson Wentz on Indianapolis Colts

Another AFC South team Ertz might like to consider are the Colts. Carson Wentz had a messy divorce from the Eagles, but ultimately got to reunite with Frank Reich in Indianapolis.

Reich was the offensive coordinator when Philadelphia won that aforementioned Super Bowl, so Ertz would not only have innate chemistry with Wentz, but he’d also have a great understanding of the Colts’ system.

Indianapolis is counting on a collection of unproven pass-catchers, especially at receiver in Michael Pittman Jr. and Parris Campbell. adding someone like Ertz would be yet another savvy move by Colts GM Chris Ballard, who has to do all he can to ensure the Wentz trade is a success. 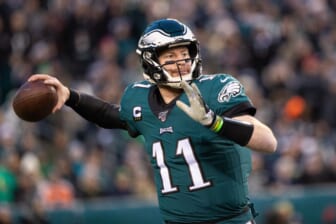 We saw last season that even as a rookie, Justin Herbert didn’t need much help to thrive in the NFL. He played behind an awful offensive line, and still managed to be among the league’s best QBs.

With a longer offseason to prepare and reinforcements added to the trenches, Herbert shouldn’t be in danger of a sophomore slump, even if he’s transitioning to a new offense.

The Chargers can’t do enough to surround Herbert with dynamic skill players. They have him on a rookie contract still, and thus have the cap space required to take on Ertz at $8.5 million.

Other than 34-year-old Jared Cook, Los Angeles doesn’t really have another viable player at tight end — much less one with Ertz’s skill set. Cook’s presence means that Ertz wouldn’t have to carry the burden of being a workhorse, go-to option, which got him banged up in 2020.

But Ertz probably has more in the tank than Cook and is better than he’s being given credit for. If Philadelphia didn’t implode so hard last year and recklessly spend so much, it’d have the means to keep Ertz and would probably want to. Alas, that’s not the case.

It’d be nice to see Ertz go to the Bolts, the Colts, or the Jags. Wherever he ends up, expect a deal to go down fairly soon.