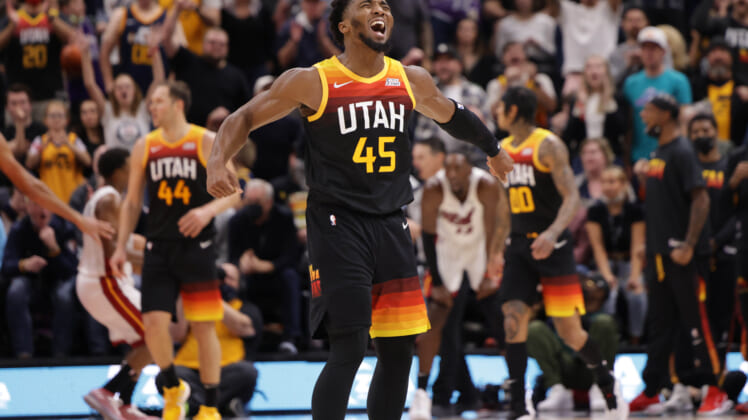 The Utah Jazz are primed to make a change this offseason with their current core seemingly hitting their plateau the past few years. There’s no indication that trading Donovan Mitchell will be the move, it could very well be Rudy Gobert or a significant addition elsewhere that does the trick, but if Spida is the one to go, he reportedly has a trade list.

So let’s break down each destination and what each landing spot would mean for Mitchell and the Jazz.

Donovan Mitchell on the Hawks? A defensive disaster

If the Atlanta Hawks are truly a team that Mitchell has his eyes on, pulling off a trade wouldn’t be difficult. The Hawks have several trade assets at their disposal with players such as De’Andre Hunter, John Collins, Clint Capela and Danilo Gallinari, they can certainly make some moves this offseason.

The bigger issue with Mitchell landing with the Hawks is the backcourt fit next to Trae Young. Offensively it would be paradise, with both players working off each other, taking turns shooting their shot, but defensively? Madness.

FiveThirtyEight’s RAPTOR stat measures and Mitchell graded as the 10th-worst player defensively during the 2021-22 season. Not exactly ideal. Then, there’s Ice Trae, who’s even worse, as the sixth-worst defensively. Basically, the perimeter defense would be atrocious, and they’d be even more reliant upon a stronger defensive presence in the paint. Not a winning formula.

Related: 3 players Utah Jazz should target in a trade to pair with Donovan Mitchell

Many players around the league dream of becoming a part of the Miami Heat culture. In reality, not everyone has what it takes to star in South Beach under Pat Riley and Erik Spoelstra. They have their share of role players who can fill it up from three, but the biggest pieces of their core are elite defenders with Jimmy Butler and Bam Adebayo both members of the NBA’s All-Defensive team.

Mitchell would help elevate the offense, and the Heat have the contracts to spare, with Duncan Robinson and others being expendable, but do they prefer him over Tyler Herro who has yet to reach his ceiling?

Donovan Mitchell in the Big Apple could be a big mistake

We know the New York Knicks are desperate to find their next basketball superstar, and to be fair, they could do a lot worse than Donovan Mitchell. He is much less likely to disappear from time to time as Julius Randle does.

But if we’re building a team for Tom Thibodeau, Mitchell should not be a trade target for the Knicks. He loses focus all too often defensively, which coach Thibs simply does not have the patience for.

Knicks fans would absolutely love the New York native, and they have the trade assets to pull it off, combining Julius Randle and RJ Barrett could be enough to get a deal done.

In the end, if it means swapping Randle and change for Mitchell, the Knicks should do what they can to make it happen. He’s a bigger star than Randle ever was or ever will be, and he’s a better overall fit on the roster with Obi Toppin waiting in the wings.

Of all the teams on Mitchell’s trade list, the Knicks would be the best fit.

Related: Donovan Mitchell trade to the New York Knicks: How it might look