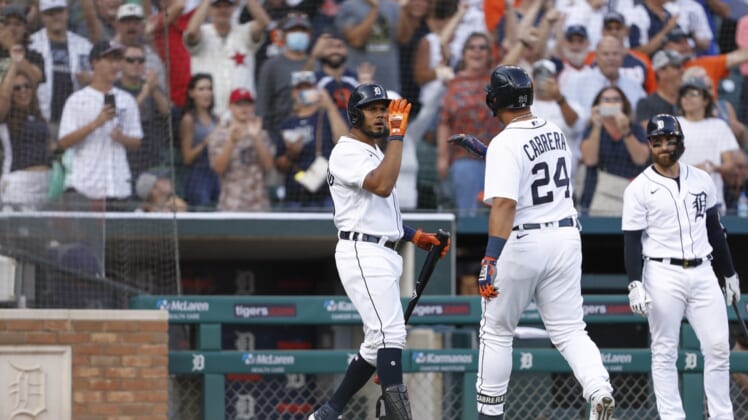 All in all, the last four years have been a monotonous rebuilding period for the Detroit Tigers. For the first time in this rebuild, however, the Tigers are finally making tangible progress.

Detroit began the 2021 MLB season at 9-24 and have improved in all facets of the game ever since. Currently 54-60, they’re in third place in the American League Central — playing competitive and well-rounded baseball. A light can be seen at the end of the tunnel.

Here are three reasons why this season has generated legitimate optimism for the Detroit Tigers.

Detroit Tigers have a handful of improving, young hitters

For the better part of the last four years, the Tigers have had minimal hitters to boast about. Now they do, and one of them is crouching behind home plate. That being Eric Haase. The 28-year-old has been one of the premier hitting catchers in MLB this season, as he’s swinging for power at a high level.

Rookie outfielder Akil Baddoo has showcased an ability to flat-out rake from the left side while holding his own in both left and center field. Now tenured third baseman Jeimer Candelario owns a respectable .778 OPS. Versatile infielder Harold Castro continues to get on base by means of contact hitting, as he sports a .283 batting average.

Every rebuilding offense needs a young foundation, no matter how electric that unit may be. Manager A.J. Hinch’s offense, which is largely homegrown, is flaunting an ability to hit the long ball. That bodes well in today’s uppercut swing, slug-driven game.

With top position player prospects Spencer Torkelson and Riley Greene nearing their call-up dates, the Tigers’ offense should reach new heights in the near future.

Detroit Tigers have productive veterans to complement the youth

As previously alluded to, a young offense needs an identity. They also need veteran bats to complement them, and the Tigers have a healthy balance of the two. Two players in particular, Jonathan Schoop and Robbie Grossman, have been the Tigers’ offensive backbone.

Schoop has swiftly made a switch to first base this season, although he’s still playing some second. Offensively, Schoop is putting the ball in play with frequency while also logging a great deal of extra-base hits. 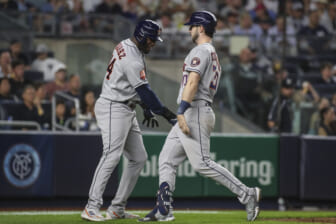 Like Schoop and the bulk of Detroit’s order, Grossman has been a consistent source of power while working the count and starting at both corner outfield positions.

And, of course, franchise royalty Miguel Cabrera has been present through and through as the Tigers’ primary designated hitter and team leader.

As the youngsters evolve into more complete hitters and players like Torkelson and Greene make their way to the big leagues, they and the likes of players in their prime like Schoop and Grossman will make for a well-oiled offense.

There’s reason to be cheerful about the Tigers’ offense this season, whereas there has been plenty of reason to be enthused by the starting rotation for quite some time. The present is no different.

Former first-rounder Casey Mize has pitched efficiently and essentially been the Tigers’ ace this season. He’s grinding through innings, working out of trouble and sports an impressive 3.57 ERA. When healthy, Matthew Boyd, Spencer Turnbull and Tarik Skubal have struck out hitters at a high rate and pitched deep into games.

A pleasant emergence for the Tigers has been the 32-year-old Wily Peralta, who is pitching the best baseball of his career out of nowhere, frankly. The right-hander, who didn’t pitch last season, owns a 3.48 ERA across 11 appearances, 10 of which are starts this season. Maybe he’s a member of the rotation past this season? Let’s also keep in mind that top pitching prospect Matt Manning is getting his first licks at the MLB game. 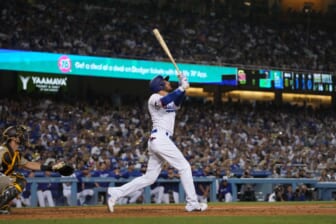 At full force, this is a deep rotation with upside given its general youth. Starting pitching is the Tigers’ identity, and they’re continually seeing progression from their young hurlers.

A model many teams have embraced in recent memory, the Tigers are building their operation through starting pitching while having a combination of young, raw power and veteran hitters in their offense. This can work. For the first time in a while, the Detroit Tigers are on the right track.