Any Detroit Pistons rumors or trade possibilities that come through the NBA offseason pipeline are potential sources for hope for a franchise that has a long way to go to field a competitive team.

But not all is lost in the Motor City. Dwane Casey is a former NBA Coach of the Year, Jerami Grant just finished second for the league’s Most Improved Player award, and Saddiq Bey and Isaiah Stewart showed promise as rookies last season despite having little to play for on a 20-52 squad.

Let’s take a look at the latest Pistons rumors, outline some trade scenarios, and break down some of the finer details as they look to mount a charge up the Eastern Conference standings. 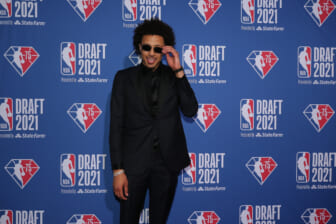 Detroit Pistons rumors: Luka Garza may be in line for much bigger role than expected

Luka Garza, the rookie out of Iowa who dominated the Summer League, is reportedly getting his two-way contract converted to a standard NBA deal, per SNY.tv’s Ian Begley.

Garza was the 52nd overall pick in the second round of this year’s draft, and has exceeded any reasonable expectations since joining the Pistons. Fans were already excited about Cade Cunningham, but if they get another first-year player to contribute, Detroit’s rebuild could really be expedited.

It’s a bit of an uphill battle for Garza to climb the depth chart, with players like Jerami Grant, Isaiah Stewart and Kelly Olynyk at the very least ahead of him in the frontcourt rotation. Nevertheless, the Pistons have to be thrilled with how Garza has progressed thus far.

James Edwards III of The Athletic reported that after the Pistons acquired DeAndre Jordan in a trade with the Brooklyn Nets, his buyout won’t feature a stretched contract:

In the NBA salary cap world, the stretch provision is deployed when teams don’t want to pay a buyout all up front, but instead stretch the money they owe the player over multiple seasons. That helps offset the immediate costs and lessens the burden in future years.

But the Pistons seem content to pay Jordan off within the time frame of “this year and next” according to Edwards. They’re making the right call, as they try to clear as much space as possible for potential future free agents who want to play alongside Cade Cunningham and Detroit’s rising young core. 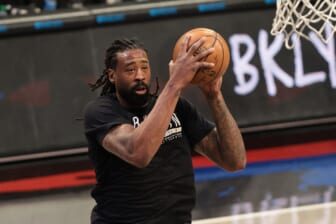 The Athletic‘s James L. Edwards III reported that Diallo, who’d yet to sign his restricted offer sheet from the Pistons and could’ve go elsewhere if a team were to outbid Detroit for his services.

Edwards asserted that if Diallo stays put, “it feels like a trade is on the horizon” that would involve either big man Jahlil Okafor or swingman Josh Jackson. Well, with Diallo reportedly re-signing, it looks like that deal could be on the way.

Okafor doesn’t really figure into the Pistons’ future plans, or at least he shouldn’t. Meanwhile, Jackson is the most expendable young player Detroit has who’s still of some value.

Jackson may be better served as a role player on a winning team, rather than scrapping for reps as the Pistons prioritize giving numerous players in their youth movement quality minutes who show greater upside.

ESPN.com’s Kevin Pelton wrote about his interaction with a team employee who’s seen Cunningham up close during summer league action, and it doesn’t paint the prettiest picture of what’s transpired thus far.

“A team employee I’m talking to mentions they’re a little lower on No. 1 pick Cunningham than consensus, and I agree,” Pelton reported.

Any sort of growing pains Cunningham experiences in exhibition play — without many of the superior, talented players who’ll be flanking him in Detroit once games really matter — are nothing to panic about. He just went through the taxing pre-draft process, and is dealing with sky-high expectations as the No. 1 overall pick.

Once he’s in a Pistons jersey and the regular season tips off, Cunningham seems like the type of all-around offensive threat who’ll have an immediate impact. He’s joining an already-promising core of young Detroit players who could make some noise in the East this season if Cunningham meets the hype.

Various reports have indicated that Cory Joseph re-signed for less money to stay in Detroit, and that the Pistons also brought in veteran big man Kelly Olynyk.

Joseph is a hard-nosed defender who’s going to be a key sounding board for Cunningham and rising second-year guard Killian Hayes as they try to lift Detroit to a much better season in 2021-22. Meanwhile, Olynyk is a great floor spacer with great 3-point shooting ability and a knack for crashing the glass.

Since Cunningham and Hayes are excellent at slashing and dishing to the perimeter, Olynyk is an ideal fit. Next, the Pistons will focus on retaining Hamidou Diallo, although he may ultimately be out of Detroit’s price range.

At the 2021 NBA trade deadline, Hamidou Diallo found himself going from the Oklahoma City Thunder to Detroit. Best known for winning the Slam Dunk Contest in 2019, Diallo has quietly developed into a fine foundational player.

The problem? Diallo is a restricted free agent. According to The Athletic’s James L. Edwards III, “there will be a few teams making a serious run at Diallo” this summer.

Diallo only turns 23 in July and has the chance with the Pistons to play a much more significant role than he did in Oklahoma City.

If you look at his per 36-minute numbers in 20 games with Detroit, Diallo posted 17.3 points and 8.3 rebounds per contest, shooting 39% from 3-point range on 3.2 average attempts on those splits.

Should that perimeter efficiency hold, Diallo is a potential revelation and another great building block for the future. It’ll be interesting to see if anyone puts in a significant offer sheet for him this summer, because that’ll be a huge decision for the Pistons front office to make.

Josh Jackson is worth dealing for assets

Because Detroit is bound to get backcourt help through the draft, should retain Diallo, and due to the fact that Jackson isn’t proficient enough on offense to be a starting-caliber player, the Pistons should absolutely trade him if they can.

Jackson was the fourth overall pick in the 2017 draft and just hasn’t lived up to that billing. He’s a career 29.8% 3-point shooter, and for a team like Detroit that needs better perimeter shooting, Jackson’s development in that area can’t wait any longer.

Any squad that needs a versatile perimeter defender with upside would likely take a flier on Jackson in a trade. Although he’s still on a cheap contract, that’s part of Jackson’s appeal, as the Pistons could flip him for either draft capital or a similarly-priced, younger guard who can score from the outside.

Potential Jackson suitors who’d make a lot of sense and could offer something strong to Detroit in return are the Boston Celtics, Washington Wizards, Los Angeles Lakers and Dallas Mavericks.