The Detroit Pistons had a banger of an NBA Draft, attaining Purdue guard Jaden Ivey (No. 5) and Memphis big man Jalen Duren (No. 13 via trade with the Charlotte Hornets).

Ivey is an electric scorer and creates an enticing backcourt alongside Cade Cunningham, the No. 1 overall pick in the 2021 NBA Draft. Duren is an athletic and productive big man on both ends of the floor. These draft selections come after the Pistons traded Jerami Grant to the Portland Trail Blazers.

Already armed with an exciting core and $40 million in cap space, here are three moves the Detroit Pistons should make this summer.

The Pistons need to move Olynyk, who they signed to a three-year deal last offseason. It was an imprudent contract from the jump and the Duren selection makes Olynyk even more expendable.

Now, Olynyk is a starting-caliber center. He’s one of the better shooting big men in the NBA, can put the ball on the floor, defends well and has found success on playoff teams. A healthy Olynyk simply takes playing time away from Duren and big man Isaiah Stewart.

Sticking with Stewart, the University of Washington product has continually provided a respectable interior presence. He hits the boards at a plausible clip for someone who’s 6-foot-8, finishes inside and can hit mid- and long-range jump shots. Stewart and Duren make for a tantalizing interior combo, whether one backs up the other or they start next to each other.

Detroit should be able to move Olynyk for a future second-round draft selection or at least straight-up shed his salary. Only $3 million of Olynyk’s projected $12 million 2023-24 salary is guaranteed.

The Pistons have been one of the worst teams in the NBA in recent memory. In other words, they need help in every aspect of the game. Porter improves them on both ends.

The 29-year-old is a proven “three-and-d” player. He’s an efficient outside shooter with the physical build to put the ball on the floor and disrupt his defensive assignment. Porter will be a primary shooter in head coach Dwane Casey’s offense, as Cunningham and Ivey figure to get a great deal of points from attacking the basket.

The veteran forward stretches the floor while beefing up a team that’s severely lacking on the defensive end. As a member of the starting five, Porter gives Cunningham and Ivey someone to bounce the ball out to on the perimeter. Coming off the bench, Porter provides a veteran two-way player to complement a young bench corps (Frank Jackson, Hamidou Diallo, Luka Garza and one of Duren and Stewart).

Detroit’s issue in signing Porter, who’s in his prime and just won the NBA Finals with the Golden State Warriors, is that he may prefer to play for a contender. This is where trading Olynyk comes into play. With roughly $12 million coming off the books, the Pistons can offer Porter a contract in the ballpark of $10-12 million per season.

Despite the recent infusion of positivity, the Pistons are still a rebuilding team, winning just 23 games last season. Signing Bridges gives the Pistons a roadmap to the Eastern Conference playoffs.

Detroit could have a pair of go-to scorers in Cunningham and Ivey, but a team in this position can’t have enough talent. A Michigan native, Bridges would play a vital role in Casey’s offense. The University of Michigan State product is coming off a breakout season with the Hornets. He attacked the basket, posed a respectable shooting threat and most notably averaged 20.2 points per game. 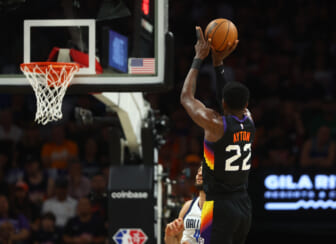 Bridges replaces Grant from the standpoint of the Pistons having a legitimate frontcourt scorer. In this case, they get four years younger and a player as impactful on the offensive end. With Bridges in the fold, Detroit would have a well-rounded starting five and rotation as a whole.

Cunningham and Ivey are talented scorers with differing offensive strong suits. Saddiq Bey is blossoming into a reliable wing scorer. Bridges is a budding star and physical frontcourt player. Duren and Stewart have the upside to be sturdy starting centers. Meanwhile, the likes of Porter, Jackson, Diallo and Garza would make for a compelling second unit.

It may very well cost a max contract to get Bridges out of Charlotte, but it’s a worthwhile investment for Detroit. They’ll have a deep core with upside for days to move forward with.