One of Deshaun Watson's accusers filed a police report on Friday, and the quarterback's attorney, Rusty Hardin, issued a response. 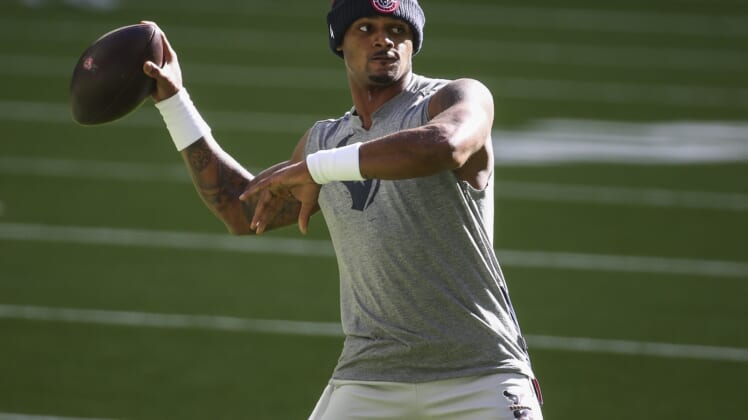 Houston Texans quarterback Deshaun Watson faces numerous allegations of sexual misconduct, but on Friday, one of his accusers filed a complaint to the Houston Police Department, which is now investigating that particular case.

In the wake of the Houston PD’s announcement that an investigation was underway, Watson’s lawyer, Rusty Hardin, responded, per NFL Network’s Tom Pelissero:

Up until this point, the numerous clients of lawyer Tony Buzbee who are accusing Watson of sexual misconduct have remained anonymous.

It’s not yet been specified whether this woman who’s coming forward with the filed police report is affiliated with Buzbee.

Even before all these allegations came to light, Watson had distanced himself from the Texans and requested a trade.

It’s been reported that Houston, who was previously uninterested in dealing away the superstar signal-caller who led the NFL in passing yards last season, is now willing to trade Watson.

After already signing Tyrod Taylor in free agency to potentially fill in as a stopgap starter in the event Watson doesn’t return in 2021, NFL Network’s Ian Rapoport reported earlier on Friday that the Texans are considering Alex Smith as another option:

Whether it’s Alex Smith or Taylor, at least in terms of playing ability and the chances of winning games next season, Houston’s outlook doesn’t seem promising.

But obviously, this whole Watson scandal is much bigger than what happens beyond this year.

It’s quite self-explanatory to some extent, but Watson will at least have a clearer path to getting to the bottom of what happened in light of Friday’s news.

Whether his name is cleared or not, there’s the danger that Watson may not get another chance to play quarterback in the NFL. Previously thought to have a great public image, all the allegations that have come to light against Watson are challenging that notion.