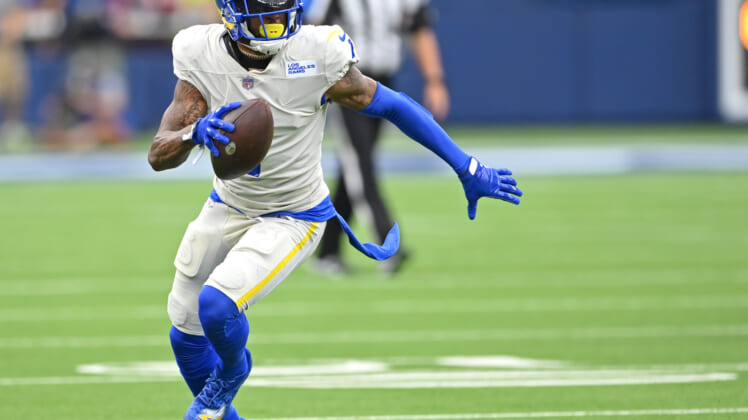 The Los Angeles Rams were looking to find a trade partner for three-time Pro Bowl wide receiver DeSean Jackson ahead of Tuesday’s deadline.

This came following indications that the veteran was not happy with his playing time after signing a one-year contract with the Rams last off-season.

Now that the trade deadline has passed, Jackson is looking for a new home. According to ESPN’s Jeremy Fowler, the Rams have opted to release the 34-year-old pass-catcher.

Jackson himself confirmed this on social media.

“I am very grateful for the time that I spent playing for the LA Rams. Although this isn’t the outcome that we wanted, I am extremely appreciative for the opportunity and support given to me by the Rams coaches and all the fans,” DeSean Jackson wrote on IG. “I understand that everything happens for a reason and I look forward to beginning the next chapter of my NFL career.”

Thus far this season, DeSean Jackson has caught just eight passes in seven games. However, he has turned those eight receptions into 221 yards, including a 75-yard score.

Will any team have interest in DeSean Jackson?

They’ll likely be some interest in Jackson on the waiver wire. Now that the deadline is a thing of the past, all players who are released are subject to waivers — meaning an acquiring team will have to take on the remainder of his contract. For Jackson, that includes the pro-rated amount of his $2.75 million base salary. If Jackson passes through waivers, he’ll be free to sign with any team.

A dominant deep threat during the early stages of his career with the Philadelphia Eagles, Jackson has been a shell of his former self in recent years. In fact, he’s caught just 31 passes in 15 games since the start of the 2019 season. From 2008-18, the former CAL standout averaged 54 receptions for 933 yards and five touchdowns.