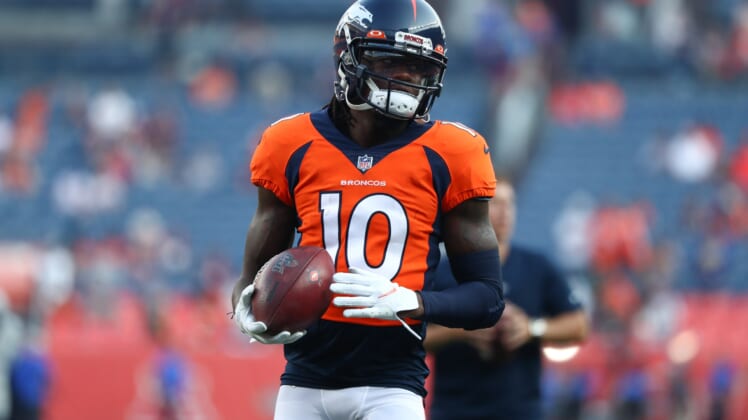 The Denver Broncos’ young cast of promising skill players took a big hit on Sunday against the New York Giants when wide receiver Jerry Jeudy was carted off the field after getting his leg rolled up on.

In an otherwise encouraging opener for the Teddy Bridgewater-led Broncos offense, Jeudy’s injury could put him out for a while. Here’s the video of Jeudy’s injury, which occurred in the third quarter:

Per NFL Network’s Tom Pelissero, it seem as though Jeudy avoided what could’ve been an even more severe injury:

Jeudy was the 15th overall pick in the 2020 NFL Draft out of Alabama, and despite a roller-coaster rookie campaign in which he struggled with drops, his potential is that of a perennial Pro Bowler. With advanced route-running ability and incredible athleticism, Jeudy’s future is extremely bright amid his age-22 season.

Unfortunately, it looks like Jeudy’s sophomore year in the NFL may be cut short.

Denver had an eerily similar situation occur last season, when star wideout Courtland Sutton went down with a torn ACL. Sutton is back in action, and joins a strong cast of wide receivers alongside KJ Hamler and Tim Patrick. Tight end Noah Fant is a dynamic pass-catcher in his own right, too.

Provided Denver’s offensive line gives Bridgewater adequate pass protection, he’s a solid game manager and decision-maker who can steer the Broncos in the right direction and keep them competitive to complement an elite defense.

That said, Jeudy’s presence and knack for picking up yards after the catch will be sorely missed.