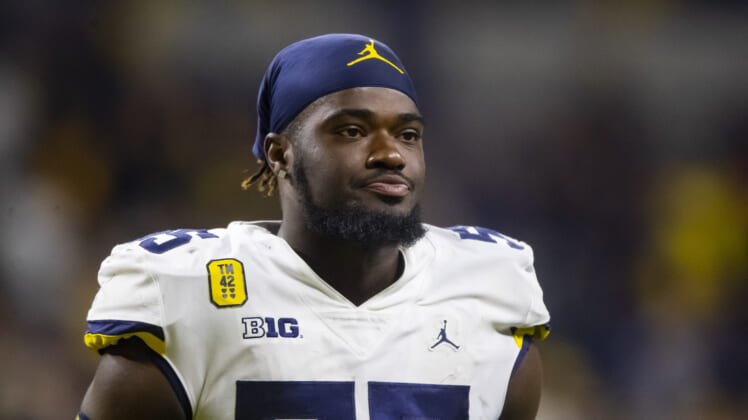 David Ojabo, a projected first-round pick in the 2022 NFL Draft, suffered a torn Achilles during drills on Friday at the Michigan Pro Day.

The 6-foot-5 edge rusher performed well at the NFL Combine in Indianapolis, posting a 4.55 40-yard dash and a 45-inch vertical jump. Wanting to solidify his draft stock and put his athleticism on display, the edge rusher went down Friday amid a workout.

Ojabo collapsed to the ground and clutched at his leg during a pass coverage drill in front of NFL scouts and general manager, per NFL Network’s Jeffri Chadiha. He required assistance leaving the practice field, leaving the attendees in silence.

According to Adam Schefter of ESPN, tests confirmed that Ojabo tore his Achilles. Doctors are expecting a full recovery, though the timeline for a return can vary.

In a best-case scenario, Ojabo might receive clearance to return after approximately six months. Los Angeles Rams running back Cam Akers tore his Achilles this past summer and returned for the NFL playoffs. However, that is one of the quickest recoveries from an Achilles tear in recent years.

Sadly, we’ve seen multiple first-round talents suffer a torn Achilles in recent years. The impact on where they landed in their draft class varied from player to player.

Weeks before the 2017 NFL Draft, cornerback Sidney Jones tore his Achilles on the final drill of Washington’s Pro Day. Viewed as a top-20 pick before the injury, he slipped to the Philadelphia Eagles with the 43rd pick. He’s played for three different teams since his return.

Just a few prior to the 2021 NFL Draft, defensive end Dayo Odeyinbgo suffered a torn Achilles during training. The 6-foot-6 defensive end was projected to be a top-40 pick before the injury and could have improved his stock at the NFL Combine. Instead, the Indianapolis Colts snagged him with the 54th overall pick and he missed a majority of the 2021 season.

Jeffery Simmons, the All-Pro defensive lineman, suffered a torn ACL prior to the 2019 NFL Draft. Viewed as a lock to be a top-10 pick, the Tennessee Titans took a chance on him 19th overall.

Realistically, Ojabo will start his rookie season on the Physically Unable to Perform list and the injury will cost him multiple games. Factoring that in mind and the uncertainty for how explosive he’ll be post-surgery, it’s very possible Ojabo slides to Round 2.