The Dallas Mavericks’ season is now complete following a 126-111 Game 7 loss to the Los Angeles Clippers. This series was one of the strangest in playoff history, seeing the road team win each of the first six games for the first time ever.

Going into the NBA Playoffs, the Dallas Mavericks looked like a team that was a dark horse to make a deep postseason run. This was reinforced when they beat the Clippers in the first two games of the series on the road. However, they were unable to defend their home floor in subsequent outings, including a Game 3 loss despite leading by 19 points in the first quarter.

Here, we will analyze the moves the Dallas Mavericks need to make to take the next step into contending for a championship.

Dallas Mavericks must upgrade the bench

Luka Doncic was absolutely spectacular for the Mavericks in the playoffs, averaging 35.7 points, 7.9 rebounds and 10.3 assists. He was nearly unstoppable making plays for himself and others throughout the series forcing the Clippers to make multiple in-series adjustments in an effort to control him. However, the Mavs were unable to keep up their production when Luka went to the bench. Simply put, there was no one good enough to take over his playmaking duties.

There are a number of good NBA free agents in this year’s class that would be help them in this area. That includes Derrick Rose, Lou Williams, T.J. McConnell and Dennis Schroder. Also, there are options in the trade market as it has been reported that the Boston Celtics are looking to move Marcus Smart. All of these guys are reliable playmakers that they will not have to break the bank to acquire.

To put it plain, Kristaps Porzingis did not play well for the Mavericks in this series. He averaged just 13.1 points, including three games in which he scored single-digits. That is just unacceptable for a player that the Dallas Mavericks brought in to be the No. 2 option behind Luka Doncic. 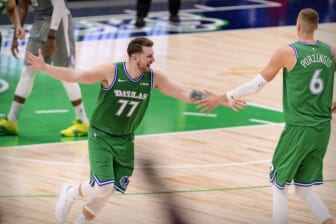 A potential move for the Mavs could be a sign-and-trade with free agent Tim Hardaway Jr. and Jalen Brunson in an effort to get C.J. McCollum or maybe even Bradley Beal. On the other hand, if they are set on having a big being their second option, why not go after Karl Anthony-Towns?

Even Marjanovic struggled in lacking certain basic skills down in the low post with the most-glaring issue being his inability to use his size to his advantage catching/holding the ball where the defender could reach it opposed to above his head. In addition to Karl Anthony-Towns, two options that would work well for them off the bench are free agents Enes Kanter and Montrezl Harrell. A long shot option for them could be to make an offer for restricted free agent John Collins or Richaun Holmes.

Better defensive players on the horizon?

Another reason for the Mavericks loss in this series (specifically Game 7) was their inability to guard the Clippers on the perimeter. They did not have anyone that could contain Kawhi Leonard one-on-one. The Clippers made a series-high 20 three-pointers in Game 7 with most of their attempts being wide open, uncontested shots. Also, the Mavs did not have the shot blockers necessary to stop the Clippers from driving to the basket consistently. This led to the Clippers drawing fouls and cashing in at the free-throw line.

There are a number of three-and-D free agents that the Mavs could pursue, including Avery Bradley, Norman Powell, Danny Green and P.J. Tucker. As far as post defenders, Serge Ibaka, Robin Lopez and Daniel Theis are all available as free agents. There’s also the option of trading for Myles Turner, who has ranked in the top five in blocked shots for each of the past three seasons.

Of all the 16 playoff teams, the Mavericks were the only one that did not play anyone that has previously played in a conference finals. Championship pedigree is essential for a young, inexperienced team in the playoffs on the court and in the locker room. That is simply something that the Mavericks lacked, as there were multiple games where they struggled with late-game execution.

It’s one of the main reasons they were unable to win a game on their home floor. Many of the players that fit the description for this role have already been named. However, there are other names they could attract. That includes Dwight Howard, Javale McGee, Alex Caruso and Patty Mills.