There’s also a major backdrop here after Dallas fell in the first round of the NBA Playoffs for a second consecutive year. Star guard Luka Doncic is not happy about the direction of the organization. That will play a role in the Mavericks’ search for a new head coach. Below, we look at four top candidates to replace Carlisle with the Dallas Mavericks.

If Dallas is looking to cater to Luka Doncic with the star guard unhappy about the direction of the organization, Laso could make a ton of sense. He coached the All-NBA performer with Real Madrid from 2015-18. The two are said to have a great relationship.

In terms of making the transition from European basketball to the NBA, it could work for the 53-year-old Laso. He’s been a head coach overseas since all the way back in 2003 and could bring that brand of basketball to a Mavericks organization that has had an international flavor to it ever since Hall of Famer Dirk Nowitzki was dominating in Big D.

Currently an assistant with the Mavericks, Mosley reportedly has a fan in the aforementioned Doncic. That could play a role in Dallas’ hiring process.

“He’s got the things that are needed for a head coach,” Doncic said during the season, via ESPN’s Tim MacMahon. “He can be the head coach, for sure.”

A former undrafted free agent from Colorado, the 42-year-old Mosley played overseas before jumping into the coaching ranks with the Denver Nuggets on the player development side back in 2005. He’s been an assistant with Dallas since 2014 and previously worked with LeBron James on the Cleveland Cavaliers.

“Multiple sources tell Yahoo Sports Calipari would be open to jumping back into the NBA. He had a taste in the late 90s, taking over the then-New Jersey Nets following a stint at UMass that didn’t go particularly well,” Vincent Goodwill of Yahoo! Sports reported recently. “But the changing dynamics at Kentucky, along with the massive expectations from the fan base and alumni, could have him looking for a second bite.”

At 62, it makes sense for the legendary Calipari to make the jump back into the NBA right now. While he didn’t have much success with the Nets from 1996-99 (72-112 record), he’s as respected of a basketball mind as anyone on the coaching circuit right now.

Over the course of his 12-year run with Kentucky, Calipari has posted a 339-93 record. He’s also turned out some of the best NBA players of this era. That list includes the likes of Devin Booker, John Wall, DeMarcus Cousins, Anthony Davis, Julius Randle, Karl-Anthony Towns, Jamal Murray and Bam Adebayo.

This almost makes too much sense. We already know that Mark Cuban fancies himself as a trendsetter within the confines of the NBA world. Hiring the first female head coach in major professional sports history would add another layer to that. 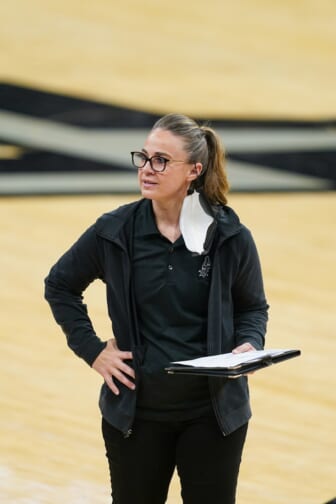 But this wouldn’t be about making history. Hammon is more than qualified to be a head coach in the NBA after working under the legendary Gregg Popovich with the San Antonio Spurs over the past seven seasons. She’s widely respected around the Association and is already a candidate for multiple openings during this year’s head-coaching cycle. Having respect from star players throughout the league, there’s no reason to believe that she wouldn’t be able to work well with Luka Doncic.