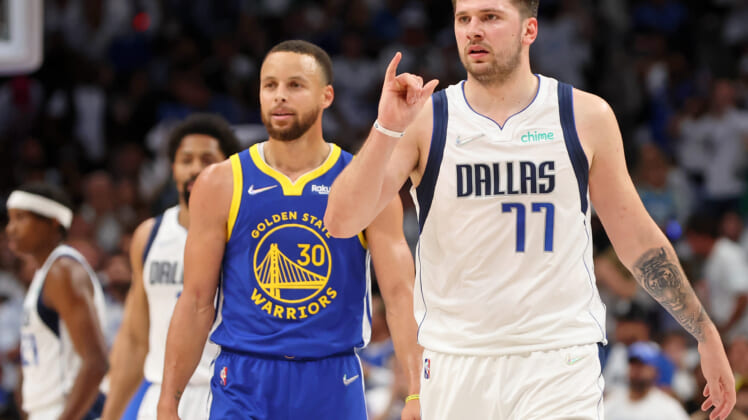 The Dallas Mavericks were unconscious from three-point range in Game 4 of their Western Conference Finals series against the Golden State Warriors.

From the Warriors’ perspective, the team just didn’t have it from long range. They hit on just 10-of-28 from beyond the arc. Most of those came with the Warriors’ second team running off a 39-20 run in the fourth quarter. The starters struggled containing whatever the Mavericks threw in their direction throughout the game.

Despite Dallas’ 10-point win, the team still faces a 3-1 series deficit heading back to San Francisco for Game 5 Thursday evening. Below, we give you four takeaways from the Dallas Mavericks’ season-saving Game 4 win.

Luka Doncic finally gets some help for the Dallas Mavericks

It’s been a major focal point throughout the series. That is to say, the Mavericks failing to get help from others behind their super talented guard. Back in Game 3, the likes of Finney-Smith and Bullock combined to hit 3-of-17 from the field. Kleber missed on all five of his three-point shots.

In no way was this the came Tuesday evening in Big D. From the get, Dallas simply couldn’t miss from distance. Before the third quarter even ended, the team connected on an absurd 19 from distance.

The three players mentioned above combined for 54 points, almost doubling Doncic’s scoring output in the process. It remains to be seen if this will be the case again on Thursday. But for one game, Dallas’ bread and butter came through big time.

Facing a team that is in desparation mode can lead to a couple things. Either said team opts to pack it in and prepare for a trip to Cancun or it comes to play big time. If the latter happens like we saw Tuesday evening, it’s up to the squad that’s up to match that intensity.

We didn’t see this from Steve Kerr’s squad inside American Airlines Center. Four of the Warriors’ five starters finished at least minus-20 when on the court. Kerr even extended his rotation to play two rookies in Jonathan Kuminga and Moses Moody together at one point. This was certainly a lost opportunity for the Warriors to gain more rest before a potential NBA Finals appearance. This is no small thing given the fact that Golden State still has three rotation pieces in Andre Iguodala, Gary Payton II and Otto Porter Jr. sidelined to injury.

Let’s be honest. Even after winning Game 4, the chances of Dallas coming away with an historical series victory remain very limited. It’s human nature for players in this situation to mail it in and prepare for the summer. A Hall of Fame player in his own right, Kidd was having none of that talk heading into Game 4.

From the get, Dallas played with intensity. Hitting three-pointers might help a lot. With that said, the team’s success on defense and ability to move the ball on the other end of the court loomed large here. There’s no give-up on this team, and Thursday’s outing magnified that further.

In his first postseason appearance since 2019 and having returned in January from two major injuries, Thompson just has not been himself throughout the playoffs. Game 3 was a prime example of this with Thompson shooting a mere 6-of-18 from the field despite a Warriors win. It’s been a continuing theme.

Thus far, it has not impacted Golden State too much in the playoffs. That wasn’t the case with the likes of Stephen Curry and Draymond Green going through the motions in Game 4. Thompson scored all of three points when this was a game in the first half.

Moving forward in this series, pre-injury Klay needs to show up at least once in order for the Warriors to earn their sixth NBA Finals appearance in eight years. If the Warriors do make it to the championship round, playing a much better defense will also force Thompson to do more.