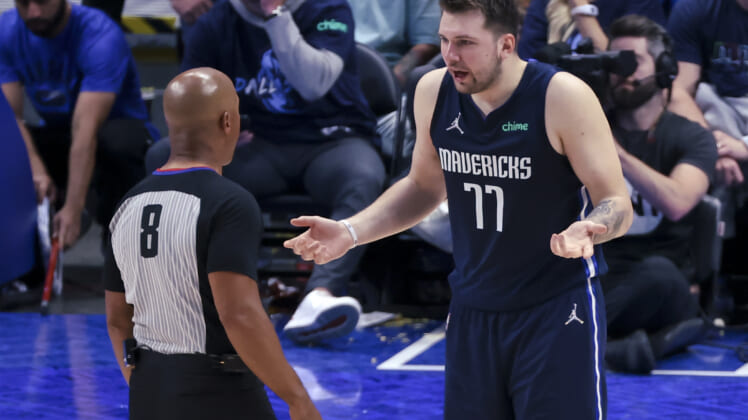 Luka Doncic and the Dallas Mavericks are up against it in their Western Conference Finals series against the Golden State Warriors.

Dallas heads into Game 4 at home Tuesday evening down 3-0 in the series after losing on their home court Sunday evening. Teams that find themselves in a 3-0 series hole during the NBA Playoffs are 0-146.

You read that right, no team has ever come back from a 3-0 deficit to win a series in the NBA Playoffs.

Just don’t tell that to a certain bettor in Las Vegas. According to Caesars Sportsbook, someone put a cool $50,000 on Dallas to win this series in seven.

Boasting +3000 odds, four consecutive Dallas Mavericks wins would net the bettor $1.5 million. The same bettor also waged $10,000 on the Mavericks to win the NBA Title, which would net the individual another $2.25 million.

Do the Dallas Mavericks have any chance to make history?

With Doncic in the mix, it’s hard to ever discount the Mavericks. Here’s a dude who is averaging 34.0 points, 7.7 rebounds, 5.0 assists and 1.7 steals through the first three games.

With that said, Doncic just isn’t getting enough help to compete with an absolutely loaded Warriors squad. The Mavs are losing by an average of 14.3 points per game. Stephen Curry is playing at a completely different level. Jordan Poole continues to do his thing. Andrew Wiggins might be the MVP of the series.

The idea that anyone would throw $50,000 in Dallas’ direction to win the next four games is pretty ridiculous. Maybe, said individual is a live-action version of Scrooge McDuck or just likes to flush money down the toilet like one Adrien Broner.