The Dallas Cowboys are starting to do things that make sense. That’s breaking news enough. However, their intentions for how to best utilize first-round pick Micah Parsons are a true indication that America’s Team may be on the way to big things in 2021.

Parsons was the 12th overall pick in the 2021 NFL Draft despite playing a less-valued position (linebacker) and opting out of his final year at Penn State. That’s how freakishly gifted and athletic he is.

Continue reading to find out the exciting role Parsons is taking on in Dallas as a rookie. 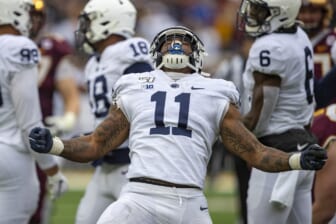 Dallas Cowboys intend to use Micah Parsons as designated pass-rusher

As was reported by Calvin Watkins of The Dallas Morning News, Parsons aligned at the designated pass-rusher spot on the edge in new defensive coordinator Dan Quinn’s scheme when the Cowboys opened minicamp.

Parsons spoke about how he’s already latched on to Pro Bowl defensive end DeMarcus Lawrence as a mentor, and how he’s tried to embrace the added responsibilities on top of playing middle linebacker, per Watkins:

“Last week we were watching film of pass rush and D-Law came up to me and was like, ‘You pass rush like that, Rook?’ I was like, ‘Yeah, I used to be a defensive end.’ He was like, ‘All right, tap in with me.’ Me and him have been getting closer. If he’s out there, he’ll help me out and we’ll talk a little bit. […] We’re going to work together before camp starts.

“[…] Playing multiple positions … has been pretty hectic for me, but I think each and every day I’m picking up something and just going out there making early mistakes. That way I’m creating a base and a ground, getting ready for camp.”

Wow. What a sigh of relief Cowboys fans must be breathing right now, am I right?

When Parsons got drafted, the pick was widely panned, since Dallas has already invested a lot in the linebacker spot with Jaylon Smith’s lucrative contract and former first-round pick Leighton Vander Esch. Plus, free-agent acquisition Keanu Neal, who was with Quinn in Atlanta, is converting from safety to linebacker.

It looks like Dallas actually had a plan for Parsons all along. He’s not just going to be a traditional middle linebacker. Quinn is going to capitalize on Parsons’ sub-4.4-second speed in the 40-yard dash, and the fact that he’s played defensive end before, to improve the Cowboys’ pass rush.

A shortened offseason and almost entirely new coaching staff led by Mike McCarthy didn’t help the Cowboys at all last year. Star quarterback Dak Prescott went down early in the season with an injury, which was also a huge setback. Having said that, they could’ve won the NFC East with a .500 record, and couldn’t get it done.

Instead of asking Parsons to step in on Day 1 and get into a potential power struggle with Smith and/or Vander Esch, which could create friction in the locker room, he’s not being limited. Frankly, the Cowboys got too cute with their schemes in 2020, and it cost them dearly.

It seems like Quinn’s base system is more straightforward, but will still allow a supreme athlete like Parsons to move all over the field and make plays. Parsons has the speed and power combination to be a legitimate double-digit sack artist in the NFL. That’s the type of talent and upside we’re talking about when it comes to him as an edge defender. 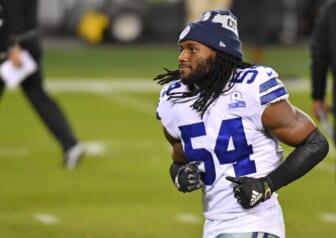 And while Dallas could’ve been, perhaps, a little quicker to reveal its hand on several of its marquee offseason transactions, thus far, the wait has been worth it when it comes to the team’s biggest decisions.

Between the decision to throw the book at Parsons early and let him adjust, as opposed to easing him along, to at long last, giving Prescott that monster contract, the Cowboys have actually had an excellent offseason in terms of their two biggest moves: The Prescott deal and their highest draft pick.

Time will tell whether any of this translates to Dallas contending for the playoffs in 2021, but Parsons as a situational pass-rusher is only going to make the Cowboys better on the side of the ball they need to improve most to reach the postseason.