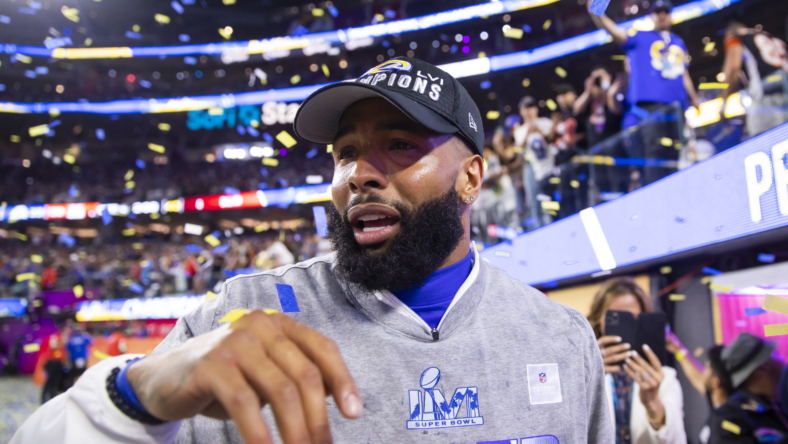 Odell Beckham Jr. is closing in on his NFL return and the Dallas Cowboys are quickly emerging as a potential landing spot for the star wide receiver as he seeks to win another Super Bowl.

After being released by the Cleveland Browns midway through the 2021 season, Beckham Jr. became the most coveted player on the open market. Multiple contenders pursued him, only for the Los Angeles Rams to come out on top.

The 5-foot-11 receiver thrived in his new home. After using the final games of the regular season to settle into the offense, he looked like one of the best NFL players during the playoffs. He delivered 316 receiving yards and two touchdowns during the Rams’ Super Bowl run and was in line to win Super Bowl LVI MVP until he tore his ACL in the second quarter.

The 30-year-old is still rehabbing his way back from the second torn ACL of his career. Finally closing in on a return, his free-agent market is heating up with Dallas now jumping into the bidding war.

According to Ian Rapoport of NFL Network, Beckham Jr. is firmly on the Cowboys’ radar and Dallas is widely expected to be strongly in the mix when the star wideout chooses what NFL team he’ll play for in the stretch run.

As with every team interested, though, the lone reservation right now is when Beckham Jr. returns and what he will look like 10 months removed from ACL surgery.

Many originally expected Beckham Jr. to return in early or mid-November. However, the timetable for recovery has been pushed back on multiple occasions. Fortunately, a return to football appears to be imminent.

According to NFL Network’s Mike Garafolo, Beckham Jr. is expected to be fully healthy and on an NFL roster in early December. He will likely hold a private workout with multiple teams in attendance, as clubs view him as a difference-maker who could make a significant impact in the playoffs and a potential Super Bowl run.

There will be significant competition for Dallas. The Rams, Buffalo Bills, New York Giants, Green Bay Packers and Kansas City Chiefs are all expected to make a run at Beckham Jr. There is also a strong likelihood that others will get involved once he is fully cleared to play.

After failing to land either Brandin Cooks or Jerry Jeudy at the trade deadline, the potential addition of Beckham Jr. to the Dallas Cowboys offense could be the final piece that puts it over the top and makes it a legitimate Super Bowl contender.