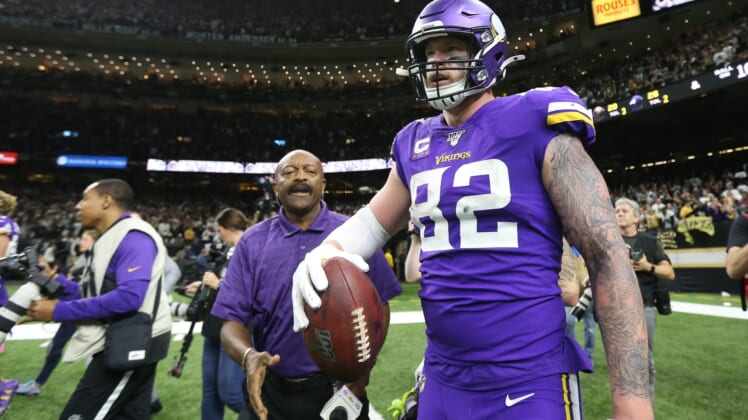 The Cleveland Browns’ offense under reigning NFL Coach of the Year Kevin Stefanski leans heavily on the tight end position, and Kyle Rudolph reportedly may be interested in joining the fold.

Rudolph could reunite with Stefanski after the two shared time in the Minnesota Vikings organization beginning when Rudolph entered the NFL in 2011. The Pro Bowler could well replace former first-round pick David Njoku in the Browns tight ends room.

Cleveland.com’s Mary Kay Cabot reported on the latest buzz from a source familiar with Rudolph’s thinking as he explores his free-agent options following his release from Minnesota:

“Rudolph […] wants to continue playing for years, a source told cleveland.com. What’s more, he’d love to play for Stefanski, with whom he was close in Minnesota, the source said.”

Mary Kay Cabot on Kyle Rudolph to the Cleveland Browns

The speculation surrounding Njoku stems from his waffling commitment to the Browns. He initially requested a trade last offseason, only to backtrack and evolve his game to become more of a blocker in Cleveland’s run-heavy attack.

With prized 2020 free-agent acquisition Austin Hooper and rising second-year player Harrison Bryant already on the roster, the Browns don’t have a ton of room to spare at tight end. Njoku could well be a high-end player at the position, but Cleveland’s depth at that spot may lead him to a different team.

No one can really question Njoku’s physical skill set, nor the upside he still has to explore at age 24. However, the Browns are in win-now mode and will probably want to minimize any potential distractions created from Njoku being underwhelmed with his role.

Credit goes to Stefanski and the coaching staff — and to Njoku to some extent — for burying the hatchet well enough to the point that it didn’t impact the team last year. With a tougher 2021 schedule ahead and less margin for error amid heightened expectations, though, Njoku may be an odd man out.

If Njoku were to be released or traded, he’d save Cleveland more than $6 million in salary cap space. That’s invaluable for this offseason in particular where the league-wide cap is lower — and it’d free up funds to land someone like Rudolph.

Given the rather thin tight end market, Rudolph is bound to be in high demand. What gives the Browns a leg up is the presence of Stefanski and his familiarity with Rudolph, along with the fact that the 31-year-old veteran is actually an Ohio native, albeit from Cincinnati as opposed to Cleveland.

The Bengals are another team to watch for. Even though they’re rebuilding, they’re in Rudolph’s hometown. Plus, like the Browns with Baker Mayfield, Cincinnati is rolling toward a promising new era with a No. 1 overall draft pick at quarterback in Joe Burrow.

Also reportedly piquing Rudolph’s interest are the New England Patriots, who have a championship culture to sell him on, not to mention plenty of cash to spend.

Rudolph knows how to be a pro, and was nothing but that in his decade with the Vikings. His still-strong relationship with Stefanski and rumored interest in rejoining him bodes well for Cleveland to handle the potentially combustible Njoku saga with aplomb.

When Stefanski served as offensive coordinator in Minnesota during the 2019 campaign, Rudolph was a willing blocker and proficient pass-catcher who hauled in 39 receptions on 48 targets for 367 yards and six touchdowns. He’s just coming off a year in which he averaged a career-high 11.9 yards per catch, so Rudolph still has plenty in the tank despite a lengthy, impressive NFL career to date.