The Cleveland Browns will be without their most talented wide receiver again this Sunday, as Odell Beckham Jr. continues to be sidelined amid an ongoing recovery from a torn ACL.

Beckham suffered his major injury in Week 7 of last season, and by all accounts, looked great when he was participating in a limited capacity throughout training camp. It’s unclear whether or not OBJ has had a setback, but it’s also possible Cleveland is just being extra cautious amid a long 17-game season.

Although it will hurt not to have Beckham in the lineup on Sunday, and you can bet the Dawg Pound was ready to erupt for his 2021 debut, it’s probably best to play it safe with the bigger picture in mind. Beckham and the Browns as an organization seem to realize this and appear to be on the same page.

Jarvis Landry is the clear veteran leader of Cleveland’s current receiving corps, yet there are some younger playmakers who are capable of answering the bell at the position group.

Rookie third-round pick Anthony Schwartz showed immense promise in Week 1’s loss at Kansas City, with three catches for 69 yards on five targets in his first NFL game. Schwartz missed much of camp with a hamstring injury, so to see him perform that well so soon is a big plus.

Donovan Peoples-Jones is a size-speed dynamo whose role should grow with Beckham still sidelined. Rashard Higgins also has excellent chemistry with quarterback Baker Mayfield, so he can fill in at any time and come up with clutch catches. 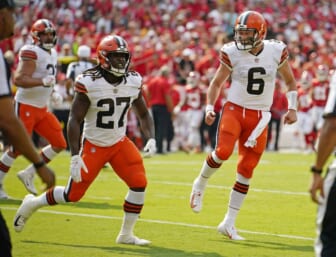 But because the Browns like to run the ball often — why wouldn’t you with Nick Chubb and Kareem Hunt? — and incorporate tight ends as pass-catchers, some of their receivers get overlooked. Beckham was out when Cleveland really turned it on down the stretch in 2020, made the postseason and got a playoff victory over the Pittsburgh Steelers.

There’s a reason some are hyping the Browns as a legitimate Super Bowl contender. They’re deep just about everywhere, and Beckham is an X-factor who can push their pursuit of a Lombardi Trophy over the top. It’s just going to be a little longer until he’s in action, and thankfully for Cleveland, the offense should be just fine in the meantime.

DraftKings lists the Browns as 12.5-point home favorites over Houston, despite the Texans’ 37-21 drubbing of the Jacksonville Jaguars in the season opener, and Cleveland’s 33-29 defeat to the Chiefs.