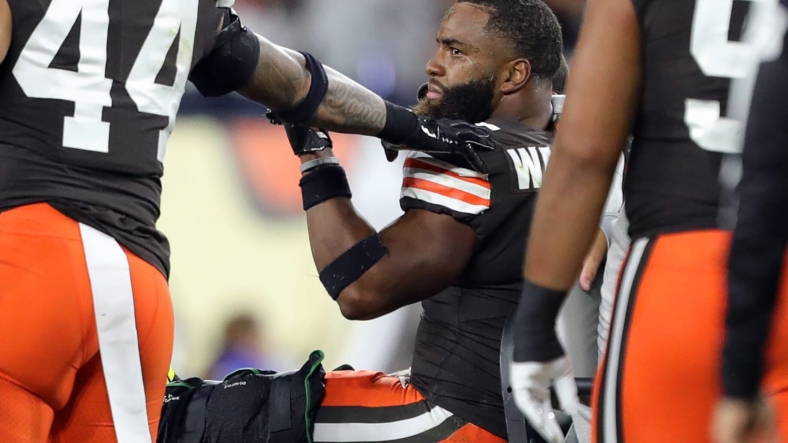 Following a big win on Thursday night, the Cleveland Browns were hit with the difficult news they likely expected, as starting middle linebacker Anthony Walker, Jr. has incurred a season-ending injury to his quad.

On Friday, ESPN NFL insider Adam Schefter reported that the 27-year-old suffered a torn quad tendon during the team’s 29-17 win over division rivals the Pittsburgh Steelers.

The unfortunate injury occurred during the third quarter of last night’s clash when Walker, Jr. was matched up with Pittsburgh’s starting right tackle Chukwuma Okorafor. The two met in the open field, and when the linebacker planted to take on the block and attempt to shed it, his left leg seemingly gave out and he was easily pushed to the ground by the lineman. Okorafor was penalized on the play after jumping on top of Walker, Jr. while he was face down on the field in obvious pain.

Walker, Jr. laid on the ground for several minutes following the injury. An air cast was then put on his knee before being carted off the field.

Cleveland Browns Anthony Walker, Jr. could be sidelined up to seven months

The final diagnosis of the 2017 fifth-round picks injury came following an MRI on Friday morning. ESPN reported that the injury would need anywhere between five and seven months to recover from. Meaning Walker, Jr. should be ready to go for training camp next summer.

The Browns also lost linebacker Jeremiah Owusu-Koramoah to a quad injury during Thursday’s game as well. However, it is unclear at this time how severe the 2021 second-round picks injury is.

Walker, Jr. is a six-year NFL veteran who was in his second season in Cleveland after a four-year stint with the Indianapolis Colts. In 2021, the Northwestern standout had one of his best seasons in the league as he racked up 113 total tackles (the second highest of his career), one sack, and one QB hit.