The spotlight was already going to be on Kansas City coach Andy Reid this Sunday with his Chiefs visiting his former team, the Philadelphia Eagles.

The wattage level cranked even higher when Reid spent the night in a hospital being treated for dehydration after last Sunday’s home loss to the Los Angeles Chargers.

Reid, 63, returned to work Tuesday and expects to be on the sideline when his Chiefs (1-2) face the penalty-prone Eagles (1-2).

Reid is the winningest coach in Eagles history. He compiled a 130-93-1 record from 1999-2012 with six NFC East titles, five NFC Championship Game appearances and a trip to Super Bowl XXXIX.

He heads to Lincoln Financial Field for the first time since Sept. 19, 2013, when he led the Chiefs to a 26-16 victory in just his third game with Kansas City.

“I’m feeling great first of all,” Reid said Wednesday. “It’s good to be back and just getting on with business as usual here.”

The Chiefs kept quarterback Patrick Mahomes and other key players updated on Reid’s condition to help minimize the distraction.

“They told me the scenario and what was going on and it wasn’t a crazy situation,” Mahomes said. “It was something they had under control, and they handled it. Then your emotions can kind of settle a little bit.”

Penalties have been the most unsettling problem for Philadelphia through first-year coach Nick Sirianni’s first three games. With a league-high 35 flags so far (for 232 yards), the Eagles are on pace for 198 penalties. That would shatter the NFL single-season record of 163 set by the then-Oakland Raiders in 16 games in 2011.

The Eagles were whistled 13 times for 86 yards in Monday night’s 41-21 road loss to the Dallas Cowboys.

“We’ve got to get that fixed,” Sirianni said. “The ones that you don’t like and the ones that are most troublesome are the pre-snap penalties. We’ve got to take care of that. That’s just us being disciplined and we’ve got to go back to work and get better at that because that’s obviously unacceptable and we’re all in this together. It starts with me and it’s unacceptable on my part. We got too many penalties.”

Philadelphia has eight more penalties than any other NFL team, and five times as many as the Los Angeles Rams.

Giving free plays to Mahomes and the high-powered Chiefs is a recipe for disaster.

Mahomes is the only quarterback in the NFL this season with three or more touchdown passes in each of the first three games. Clyde Edwards-Helaire rushed for 100 yards and caught a TD pass against the Chargers, while Travis Kelce posted his second consecutive 100-yard game.

Kelce will be playing opposite his older brother, Eagles center Jason Kelce, for just the second time on Sunday. The tight end caught eight passes for 103 yards and a touchdown in a 27-20 win in Kansas City on Sept. 17, 2017. 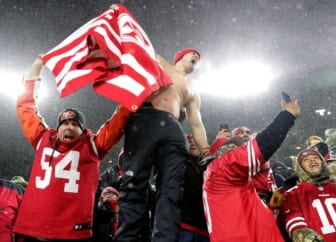 The Eagles placed left guard Isaac Seumalo (foot) and safety K’Von Wallace (shoulder) on injured reserve Tuesday. Seumalo is out for the season with a Lisfranc injury that requires surgery. Jordan Mailata (knee) did not practice Wednesday and fellow tackle Lane Johnson (ankle) was limited, as were safety Marcus Epps (shoulder) and guard Landon Dickerson (hip). Safety Rodney McLeod was a full participant for the first time this season, nine months after tearing his ACL.