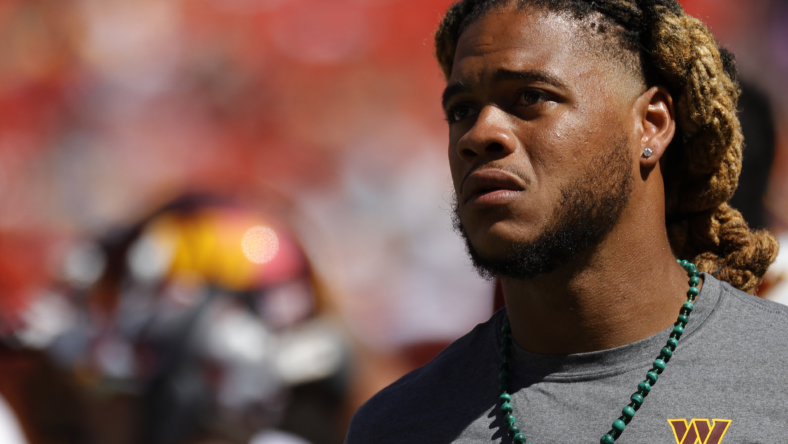 Fresh off a shocking win over the Philadelphia Eagles on Monday, the Washington Commanders are about to get a reinforcement back in the mix.

ESPN’s Adam Schefter noted Tuesday morning that former NFL Defensive Rookie of the Year Chase Young is expected to be activated off the physically unable to perform (PUP) list ahead of next week’s outing against the Houston Texans. If all goes according to plan, Young will play against Houston.

Young, 23, has been sidelined since suffering a torn ACL back in Week 10 of the 2021 season. It has been a long rehab process for the former No. 2 overall pick from Ohio State. But his return to action will loom large for a Commanders team that is now right in the thick of the NFC Playoff race heading into Week 11.

Impact of Chase Young’s return on the Washington Commanders

Washington already boasts a pretty solid defense. It heads into Week 11 having yielded the 11th-fewest yards in the NFL. Opposing quarterbacks have been sacked 24 times in 10 games with interior linemen Daron Payne (5.5) and Jonathan Allen (4.5) leading the charge.

Getting a top-end edge guy back into the mix to help out these two interior pass rushers is going to be absolutely huge for Washington. Young will now team up with Montez Sweat (four sacks) to help create even more domination from a pass-rush perspective.

The No. 2 pick back in 2020, Young put up a tremendous performance as a rookie (12 QB hits, 10 tackles for loss, 7.5 sacks, four forced fumbles). However, he was struggling as a sophomore before going down to injury.

As for his return to live-game action, Young’s rehab was delayed by a setback ahead of the start of the regular season. It’s now going to be north of a calendar year between the last time he suited up and his season debut against the Texans on Sunday.

We can expect the star pass rusher to be put on a proverbial pitch count by his Washington Commanders team.