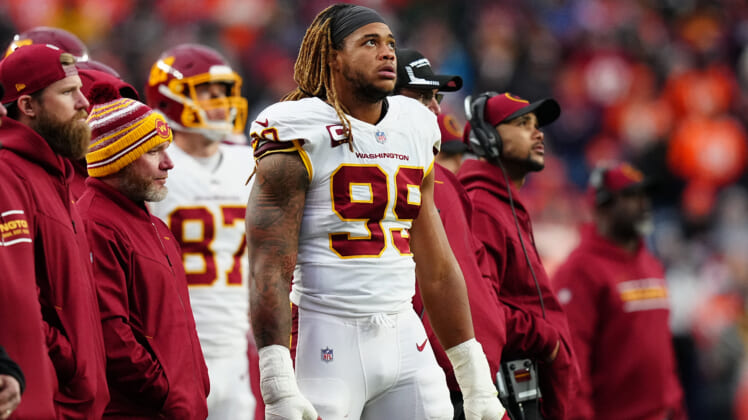 The Washington Commanders’ defense suffered a devastating blow in Week 10 last season when edge rusher Chase Young suffered a torn ACL. Unfortunately, the knee injury will prevent him from being ready for the 2022 NFL season.

Young, the 2nd pick in the 2020 NFL Draft, got off to a fantastic start in his NFL career. He recorded 12 quarterback hits, 10 tackles for loss and earned Defensive Rookie of the Year in 2020. Sadly, everything that could go wrong for the 6-foot-5 pass rusher did this past year.

A fixture in one of the best NFL defenses in 2020, Young and his teammates took a step back a year later. After registering a 25.9% pressure (fifth in NFL) rate the year prior, Washington ranked 19th in pressure rate last season.

Young only compiled four quarterback hits and 1.5 sacks in nine games before suffering an ACL tear. Months after undergoing surgery, with Washington approaching training camp, head coach Ron Rivera told Jeremy Fowler of ESPN that Young is more than likely headed for the Physically Unable to Perform list at the start of training camp.

When is Chase Young coming back?

Washington placing Chase Young on the PUP list isn’t the worst possible news for the franchise. As of now, it would have no barring on his availability for the start of the 2022 season. As Rivera told reporters, the organization is taking a cautious approach with its star defender.

“At the end of the day, we can’t force anything. It’s about when the player’s ready to roll and we’ll go because he is valuable to us. You don’t want to force that situation and all of a sudden you don’t have a healthy player and something bad happens. So, again, we’re going to do it right. We’re going to prepare him. In the meantime, that just means other guys are getting opportunities and have got to step up and play some good football.”

This is something Washington needs to handle delicately. In a sport full of elite athletes, Chase is a special type who wins with incredible speed, agility, fluidity and bend. Washington needs to know Young’s knee is stable and can handle all the movements necessary to make an impact without risking further damage to the ligaments.

In a best-case scenario, Young might have a shot at taking the field in Week 1. Even if that happens, though, he won’t be at 100% less than 10 months removed from ACL surgery. Fortunately, it doesn’t seem like he is a candidate right now to open the season on the PUP list, a decision that would sideline him for the first six weeks.

For now, the Commanders will have to keep monitoring how strength in the knee improves and what range of motion and fluidity Young has in it in the weeks ahead. Once he regains confidence in moving on the surgically-repaired leg, doctors should have a clear timetable for his return.