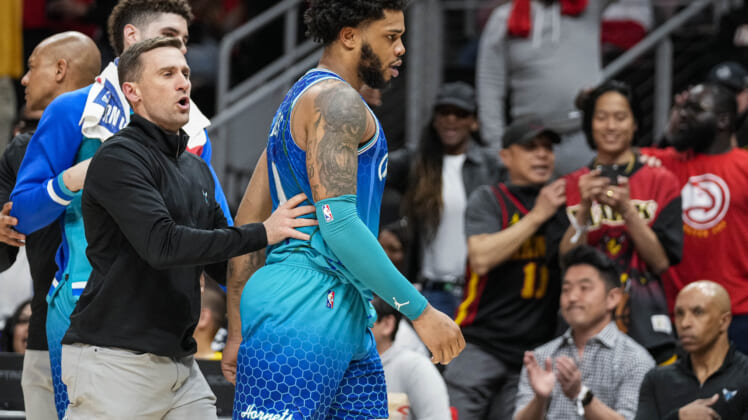 If Miles Bridges had a goal of moving on from the Charlotte Hornets this offseason, he may soon be getting his wish, though likely not in the exact way he originally envisioned.

Heading into the offseason, Bridges appeared to be a strong bet to land a max or near-max contract, whether it was from the Hornets or another organization. While it’s possible the Hornets were never going to offer Bridges the max (they hadn’t shown any indication they would), after his arrest for domestic violence, there’s no way he’s getting the contract he dreamed of.

Bridges is currently a restricted free agent, meaning any team that offers him a contract would be giving the Hornets a chance to match that same deal. But we’re three days into free agency and there has been zero movement toward Bridges getting a long-term contract.

In fact, according to Emiliano Carchia of Sportando, the Hornets are expected to pull their qualifying offer to Bridges, which would then make the 24-year-old forward an unrestricted free agent. This seems directly tied to his arrest, as the Hornets would be better off trying to at least complete a sign-and-trade for their budding star. But evidently, they want nothing to do with him. How might that change things for Bridges?

Miles Bridges may have cost himself millions

The biggest deterrent to Miles Bridges getting the five-year, $173 million max contract he was potentially in line to receive from the Hornets is himself. Had he not gotten arrested at the worst time possible for his career, he’d likely be celebrating signing a nine-figure contract right now. Instead? Any team considering signing Bridges would be risking a massive public relations hit, as the allegations against him are not encouraging.

If Bridges had a specific destination he had picked out in his mind, well they may no longer have any interest.

It remains to be seen what type of contract Bridges could be looking at this summer. Chances are, even with his off-court baggage, some team looking to add a spark to their lineup will be enticed by Bridges’ talent, looking the other way when it comes to his flaws. Needless to say, it will be very interesting to see whether Bridges has to settle for a short-term contract, or if he can still land a contract paying him eight figures or more.

If Bridges becomes an unrestricted free agent, his best bet to land a big deal would be signing sooner than later. As the offseason goes on, the money teams have will be all dried up, which could force Bridges to take a contract paying him a drastically-reduced salary. Did one stupid mistake cost Bridges over $100 million? Time will tell.