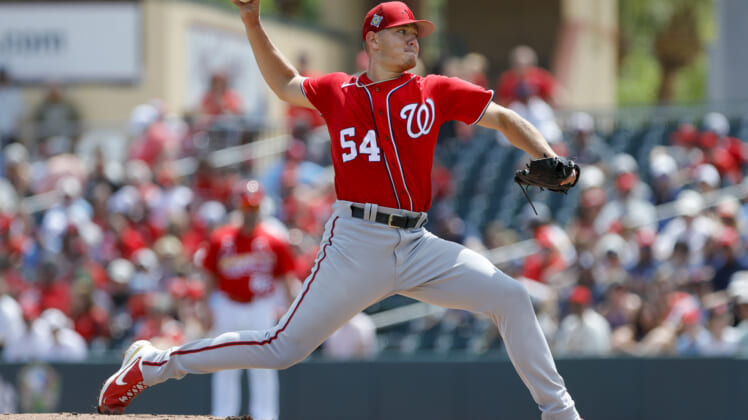 Whatever the Washington Nationals were hoping to see out of top pitching prospect Cade Cavalli on Wednesday, well it’s safe to say the plan went horribly. After giving up a whopping 10 earned runs across two and a third innings of action, reactions to Cavalli’s performance ranged all over the place.

Why did the Nationals leave Cade Cavalli out to dry?

It’s not entirely Cavalli’s fault that manager Dave Martinez decided to allow his pitched to get absolutely shelled before waiving the white flag. Sure, Martinez undoubtedly wanted to see how his young 23-year-old pitcher responded to some adversity in the big leagues, but there’s a point where enough is enough. They should have pulled the plug before risking doing any further damage to their prospect’s psyche.

While the Nats likely wanted to see a competition between Anibal Sanchez and Cavalli for the final spot in their starting rotation, for what it’s worth, the 38-year-old Sanchez didn’t fare any better against the Cardinals.

Obviously those are some pitching lines no one wants to see. For Sanchez, he was just signed on March 13. For Cavalli, he has very little experience facing big-league pitching, even if it wasn’t the Cards’ opening day lineup.

Spring training is supposed to give players a chance to work back into shape, maybe trying a few new tweaks to their technique they’ve worked on throughout the offseason, while building confidence to be ready to start the year. Sure, getting Cavalli experience is valuable, but there has to be a limit, especially when dealing with a top prospect.

No. Just because Cade Cavalli had one rough outing in exhibition play, that doesn’t mean he can’t still open the season as the fifth starter out of Washington’s bullpen. That doesn’t mean he will, since that’s not the expectation, but Cavalli’s long-term ceiling is just as high as it was before.

Any time you can throw a fastball topping 100 mph, you’ve got major league stuff. He knows it, the Nationals know it, everyone in the show knows what he’s capable of. This is the same reason why he was selected 22nd overall in the 2020 MLB Draft and why he’s catapulted to the 39th ranked prospect among the MLB top-100.

Cavalli’s most recent performance may not have been what anyone wanted to see from him on the mound, and with limited time left before the April 7 baseball opener, who knows whether it will impact his ability to be the team’s fifth starter. He certainly offers more upside than Sanchez, but do they want to start his clock now? It’s not like we have a World Series caliber squad here.

The Nationals likely never planned on Cavalli opening the season with the big league club for that same reason. It likely didn’t matter whether he gave up zero runs or 10, his fate was likely sealed long ago. Perhaps this bitter taste will only motivate the Nationals’ top prospect even further, allowing him to have a more impactful major league debut later in the year.

In all likelihood, Cavalli will begin the season back with the Nationals’ AAA affiliate as their staff ace, playing for the Rochester Red Wings. But if Sanchez flutters early on, as long as Cavalli can get back into top form, it may not be for long.