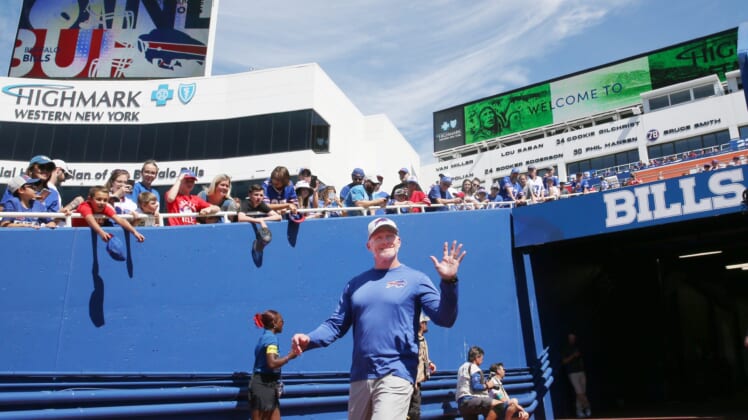 The football world received somber news on Thursday when word broke of Florida International Panthers linebacker Luke Knox passing away at the young age of 22 years old. It’s never a story anyone ever wants to hear or even read about, but unfortunately, it’s reality.

Knox was the younger brother of Buffalo Bills tight end Dawson Knox, and the team wanted to honor the Knox family ahead of their Week 2 preseason game against the Denver Broncos by holding a moment of silence prior to kickoff.

As expected Knox was not in uniform or with the team for Saturday’s game, as he is spending time mourning with his family.

The Bills already extended their well wishes toward the Knox family with head coach Sean McDermott sharing some heartfelt words in the wake of the tragic news, but they wanted to show their support in a bigger, more public way.

That came on Saturday in an emotional moment of silence for Luke, in which the entire Bills team stood on the sideline before kickoff, showing their respect for the family of their teammate.

FIU, Buffalo, and Knox family try and move on

While we never want to see or celebrate such moments like this, the Bills did the right thing by doing their part to remember Luke as the Knox family tries to deal with their heavy hearts.

Luke’s funeral services are taking place today. His cause of death remains unknown, though foul play is not suspected according to the Associated Press.

The FIU Panthers begin their season on Sept. 1 against Bryant, but now they’ll have to do so without one of their fellow teammates.

Buffalo’s season gets underway Sept. 8 in what some might suggest could be a future Super Bowl matchup against the Los Angeles Rams. Now Dawson will have even more motivation to put his best effort forth, though clearing his mind on gameday will take a special amount of strength.