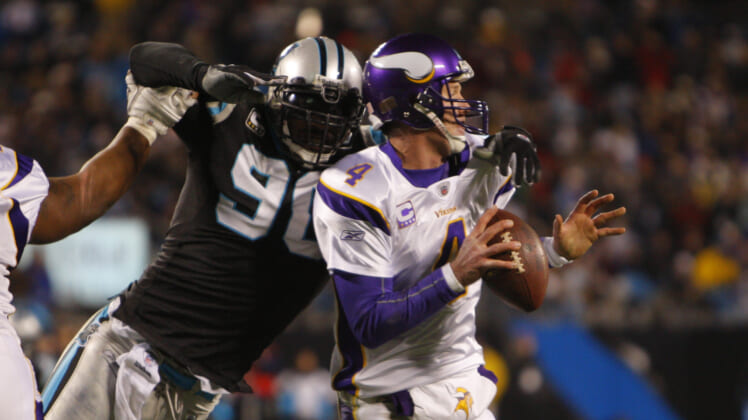 As the NFL continues to receive pushback from its players over the mandatory use of Guardian Caps to reduce blows to the head during practice, Hall of Fame quarterback Brett Favre might be providing a reminder of why they are necessary.

Concussions and the effects of chronic traumatic encephalopathy (CTE) have become a more pressing issue for the NFL in recent years. The deaths in recent of former stars whose brain scans after their passing revealed CTE, including Demaryius Thomas and Aaron Hernandez, has highlighted the damage football can do to the brain through repeated hits to the head.

It’s led to the NFL making sweeping changes to its concussion protocol. Among them, changing the definition of what a concussion is and pulling any player diagnosed with a concussion from a game or practice and not allowing them to return until they are cleared by an independent doctor.

For Favre, who became the NFL’s Iron Man and started in 297 consecutive games, these protocols weren’t in place during his career. Looking back on his playing days and all he experienced, Favre told TMZ Sports that he likely suffered thousands of concussions during his playing days.

It’s an honest admission from Favre, but just the latest example of one of the all-time great quarterbacks shining the spotlight on a game that took a toll on him and others.

Favre hasn’t spoken out before about the effects football has had on him and the safety of the game. During a 2013 interview, the legendary Green Bay Packers quarterback admitted to dealing with memory loss with important things regarding his family.

It’s one of the lasting effects decades of football had on Favre’s physical and mental health. It’s also not a surprise for a player who routinely put his body on the line, taking 525 sacks and countless other hits across 302 career games in the NFL.

Favre has since partnered with the Concussion Legacy Foundation, taking part in a powerful PSA. As he told the “TODAY” show in 2021, he isn’t sure if he has CTE but it’s undeniable that he suffered concussions and the world is still learning so much about trauma to the brain.

“I don’t know what normal feels like. Do I have CTE? I really don’t know. Concussions are a very, very serious thing and we’re just scraping the surface of how severe they are.”

Brett Favre on if he thinks he has CTE

All of it is why Favre is against children under the age of 14 playing tackle football. It’s also seemingly inspired some of the contributions he’s made since his Hall of Fame career, trying to raise more awareness about what players go through after retiring.