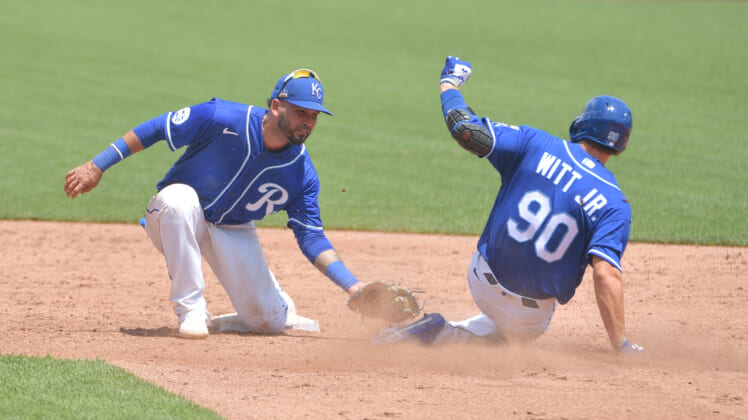 The Kansas City Royals didn’t waste a moment selecting Bobby Witt Jr. when they were put on the clock with the No. 2 pick in the 2019 MLB Draft. Similarly, there should be zero hesitation when it comes time to decide whether or not he makes the Opening Day roster.

No one is expecting the Royals to contend in 2022. Our MLB predictions project Kansas City to finish at the bottom of the AL Central standings. There is a bright future for the organization, but there are too many holes on the roster to compete with the best teams in MLB.

Ordinarily, teams in a transition year would keep their top prospects down. In the old CBA, there would be something to gain out of it. Through service-time manipulation – rostering a player in the minor until they aren’t eligible for an accused season – clubs would gain additional contract control and could limit future salaries.

Things are different under the new collective-bargaining agreement. Players who are finalists for Rookie of the Year receive a full year of service time, no matter when they are promoted. It’s just one of the reasons why Witt Jr. should be on Kansas City’s roster when the 2022 season begins.

Bobby Witt Jr., the son of former MLB pitcher Bobby Witt, made a strong case to make his major-league debut a year ago. Despite only being 20 years old at the time, Witt Jr. exceeded the wildest expectations Kansas City held for him in his first full spring training.

While success in spring training doesn’t translate to great numbers in a meaningful MLB season, Witt’s accomplishments at his age were remarkable. The Royals carried him on their spring roster and gave him some consideration for a spot on the Opening Day roster. Ultimately, he opened the season at the Double-A level.

It disappointed plenty of fans who wanted to see the next MLB star immediately. However, the Royals seemed to be proven right early on in 2021. Through the first month of the MiLB season, Witt Jr posted a .233/.314/.478 slash line with a 30.4% strikeout rate and a 107 wRC+. He needed time to adjust to the level, but it didn’t take very long.

Over his next 39 games with the Double-A Northwest Arkansas Naturals – Kansas City’s minor-league affiliate – Witt tore the cover off baseballs on a regular basis. He cut his strikeout rate down to 20.3%, raises his slash line to .331/.401/.623 with a 166 wRC+.

The Royals saw enough, promoting Witt Jr. to Triple-A Omaha and he made his debut with the Storm Chasers on July 20. This time around, he didn’t need an adjustment period. The 6-foot-1 infielder hit his first Triple-A home run on July 21, the first of many to come at that level.

Named to Minor League Player of the Year following the 2021 MiLB season, Witt Jr. did absurd things in just a few months. He became just the third minor-league player to post a 30-30 season, joining Luis Robert (2019) and Grant Desme. The feat was technically taken away because a rainout wiped away the final game. Much like the home run that umpires wrongfully took away by suggesting he didn’t touch home plate, it deserves to be on the final stat line.

Baseball fans will see Bobby Witt Jr. debut in 2022. It’s all a matter of when Kansas City makes the decision. One thing is for certain, the 21-year-old earned the opportunity already.

Immediately after the 2021 season ended, Witt Jr. went back to work on improving his game. Alec Lewis of The Athletic detailed the extensive training process the star infielder went through during the offseason, working to improve in every aspect of his game.

This is also a player who already earned the respect of Royals players inside the clubhouse. They saw what he could accomplish last season in spring training and he’s returned for camp looking even better. He also brings the intangibles that manager Mike Matheny wants.

“That X-factor for him might be his passion for the game. his kid loves walking in here and throwing on that jersey.”

Witt Jr. checks off every single box to earn an MLB call-up. There’s also an opening in the Royals’ lineup at third base. Fans are clamoring to see the new face of the franchise and they want something to root for in 2022. There are no valid excuses, Bobby Witt Jr. needs to take the field for the Royals on Opening Day.