Millions watch the NFL on TV every week during the football season. These days, fans take in national broadcasts in multiple formats across various devices. While you can watch a game in any way you like, there is always a broadcasting team helping explain what’s happening on the field while educating their fan base. We highlight the best national TV NFL broadcasting teams on television today.

How can anyone not enjoy watching a game called by Tony Romo and Jim Nantz? There’s a reason they both make the big bucks. Having a strong presentation is what the NFL is all about. Romo and Nantz are the best in the business. When watching a Romo-called game, it feels like you’re kicking back with your pals enjoying a cold brew with the game on. Everyone’s having a good time.

The duo of Cris Collinsworth and Al Michaels team up to form one of the better broadcast teams in football. From on-screen chemistry to efficiently informing the public, the Collinsworth-Michaels pairing keeps it loose and fun. The entire NBC presentation is well done, frequently incorporating Pro Football Focus’ advanced stats. Carrie Underwood kicking the night off isn’t so bad, either. But that’s purely a bonus.

The longest pairing on national NFL TV broadcasts today, Troy Aikman and Joe Buck have been working together for nearly 20 years. Developing a strong bond, the two have been the voice for several historic moments in football. While Buck will always have a special place in my mind for his disgusting comments during the Randy Moss mooning, he does a good job.

The trio of Brian Griese, Louis Riddick and Steve Levy are better than the Booger McFarland crew, but it still leaves much to be desired. Especially when considering this is the team ESPN put together for Monday Night Football. It feels like a random pairing, slapped together to form a crew.

Peyton Manning and Eli Manning will be TV broadcasting royalty

Though the current ESPN broadcast team isn’t the greatest, a special broadcasting crew may be developing on ESPN2. Once they make their debut, Peyton Manning and Eli Manning are likely to become fan favorites. Call it a slap in the face to the experienced professionals, but the charisma of the two quarterbacks is off-the-charts. 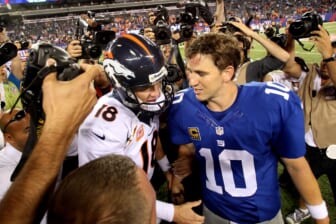 Over the years, just about every TV production company around has pursued Peyton to try and convince him to become a full-time broadcaster. While only 10 games will be covered, the Manning brothers have the potential to quickly become broadcasting legends. Displaying a strong sense of humor while sharing their expansive knowledge of the NFL and its history, being able to watch a game with the Mannings will be a treat.