ESPN had a major announcement on Monday, leading up to the start of the 2021 NFL season. Peyton Manning and Eli Manning will take part in alternate broadcasts for 10 “Monday Night Football” games in each of the next three seasons.

The announcement came as a stunner on social media, and included specifics from the four-letter network.

“ESPN and The Walt Disney Company have reached an unprecedented partnership with Peyton Manning and his Omaha Productions company that will result in a first-of-its kind Monday Night Football MegaCast production, featuring both Peyton and Eli Manning. Peyton and Eli, combined four-time Super Bowl champions, will headline the new additional viewing option starting with the 2021 NFL Season through the 2023 season (a total of 30 games over 3 seasons),” ESPN announced, via its official website.

“Each Peyton and Eli-fronted MegaCast will be distributed on ESPN2, with potential for additional distribution on other Disney properties including ESPN+, complementing Monday Night Football’s traditional telecast, which will continue to be available on ESPN and/or ABC each week. Together, the two viewing options will expand the reach and audience of the historic NFL television franchise.”

Since retiring from the NFL following the 2015 season, Peyton Manning has been the focus of multiple networks as it relates to broadcasting gigs. While this is not a full-time job, it will put the Hall of Fame quarterback front and center.

As for Eli Manning, he retired from the league following the 2019 campaign. The two-time Super Bowl champion just joined his former New York Giants’ team in a front office role and has a lot of things going on in his post-NFL career. 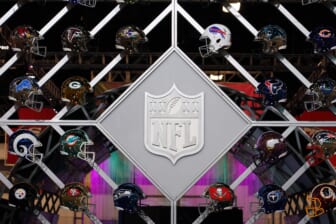 “Offering multiple Monday Night Football viewing options for the next three seasons continues our innovation efforts and provides additional value for our fans,” said Jimmy Pitaro, Chairman of ESPN and Sports Content said in a statement. “Peyton and Eli will bring a different approach, delving into conversation about broader, big-picture topics while also honing in on the game, much like fans do when watching with their family and friends.”

This is an innovative new way for ESPN to utilize its cross-platform approach to entice new viewers after ratings saw a sharp decline during the COVID-defined 2020 NFL season. Adding Peyton Manning and Eli Manning as a non-traditional broadcast tandem will only create more interest.