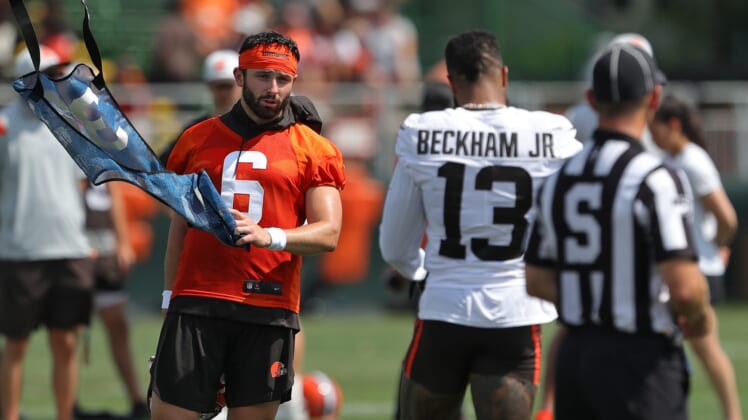 It looks like Baker Mayfield lost a lot of Cleveland Browns’ locker room support after popular teammate Odell Beckham, Jr. was cut from the team during last season.

Beckham, Jr.’s tenure with the Browns did not at all deliver on the promise after the franchise gave up and first and a third-round pick in 2019 for the New York Giants wide receiver. He never played a full season over his first three years with the team, and his numbers were well below what he did during his Pro Bowl seasons in NY.

However, some put some of the blame for Beckham, Jr. not having better seasons in Cleveland on the team’s starting quarterback during that time, Baker Mayfield. The situation between the pass catcher and team only soured more when his father publicly spoke out about his frustrations with what he felt was a lack of opportunities for his son.

Not long after, Beckham, Jr. was released from the team, he signed with the Los Angeles Rams and helped them reach and win Super Bowl LVI. Certainly, a serious shoulder injury that Mayfield kept hidden from the press affected his play, but things were already going in the wrong direction between Beckham, Jr. and the Cleveland Browns before then.

However, in a new column from ESPN’s Jake Trotter, he reported that Beckham, Jr. was a highly liked player on the team and many did not want to see him jettisoned from the franchise.

Once that happened, it had a major effect on the relationship between the team’s starting QB and the pro-Beckham, Jr. contingent in the locker room for the rest of the season.

“After Beckham’s father ripped Mayfield publicly and speculation grew about Beckham being on his way out, multiple players lobbied for Cleveland to keep OBJ on the team … As one source put it, the way Beckham exited Cleveland ‘poisoned the well’ for Mayfield with some teammates,” Trotter wrote.

Following the team’s acquisition of Houston Texans QB Deshaun Watson in March, it seems likely the team will trade or cut Mayfield before the start of the 2022 season. However, now knowing that some in the locker room have turned on the one-time Heisman Trophy, it is all but a guarantee that Mayfield is elsewhere in June.