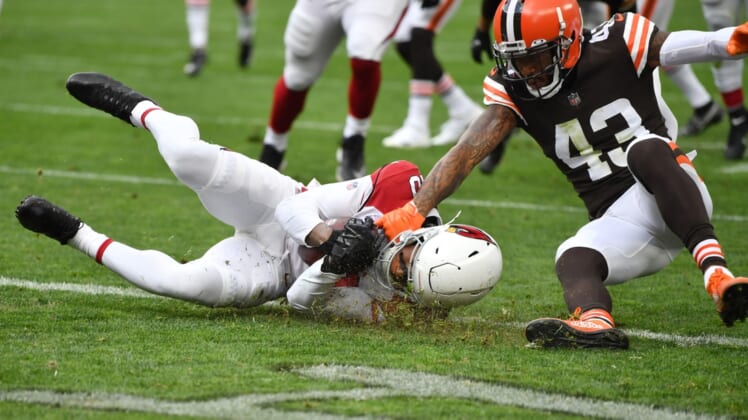 The Arizona Cardinals remained the lone unbeaten team in the NFL by rolling past the host Cleveland Browns 37-14 on Sunday.

Kyler Murray completed 20 of 30 passes for 229 yards and four touchdowns and DeAndre Hopkins hauled in a pair of scores as the Cardinals (6-0) cruised despite the absence of head coach Kliff Kingsbury, who missed the game to COVID-19 protocol. It was the Cardinals’ fifth straight win against the Browns (3-3).

Cleveland, which dropped its second straight, entered the game reeling from injuries and got more bad news throughout.

The Browns played without lead running back Nick Chubb and starting tackles Jack Conklin and Jedrick Wills Jr. During the game, quarterback Baker Mayfield (shoulder), wide receiver Odell Beckham Jr. (shoulder) and running back Kareem Hunt (calf) all sustained injuries. Hunt did not return after his injury early in the fourth quarter.

The Browns had rushed for 150 or more yards in each of their first five games, but were held to 73 rushing yards on 19 carries. Cleveland finished with nine penalties for 88 yards and gave up five sacks.

Mayfield lost his second fumble of the day and J.J. Watt picked up his first sack of the year on the same play in the third quarter. The Cardinals cashed in the turnover with Murray’s 9-yard touchdown to Hopkins for a 30-14 lead.

Cleveland tried to answer, but a fourth-down pass from the Arizona 7-yard line was dropped by Beckham with 12:06 remaining.

The Cardinals dominated the first half and scored on each of their five possessions, but settled for a modest 23-14 lead at the break. Murray found Christian Kirk with a 21-yard touchdown pass to cap the first series, then dropped in a 13-yard score to Hopkins for a 14-0 lead with 14:49 left in the half.

Mayfield’s first sack-fumble and his interception to Arizona’s Robert Alford resulted in Matt Prater field goals of 36 and 51 yards for a 20-0 Cardinal lead with 9:29 left.

Mayfield got Cleveland on the board with an 11-yard touchdown to Peoples-Jones while Arizona added a third Prater field goal, from 33 yards out with 46 seconds left.

But Cleveland ended the half with Mayfield’s 57-yard Hail Mary that People-Jones hauled in to cut the margin to 23-14 at the break.