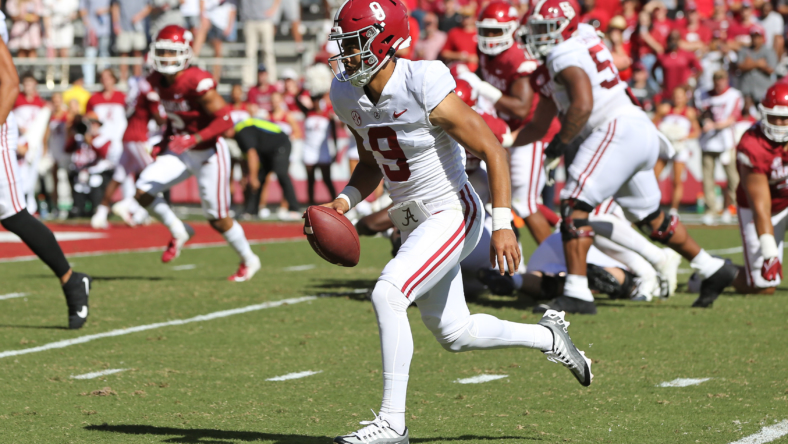 Like most seasons, the Alabama Crimson Tide have rolled without many hiccups. After falling short in the College Football Championship to Georgia, Alabama is 4-0 on the season as they headed into a matchup with Arkansas, who is also ranked. Unfortunately, the leading story from this one is Bryce Young having to lead the game with what appears to be a shoulder injury.

The Heisman winner of the 2021 season appeared to be injured on a scramble attempt toward the right sideline. Here’s the clip.

The potential top pick in the 2023 NFL Draft left the field shortly after. After an evaluation in the medical tent, Young could be heard yelling in frustration as he threw down his helmet, and he later would head to the locker room.

Alabama did not have any medical updates to provide on their quarterback during the action, and Young did not return to the game against Arkansas.

Just how bad the Bryce Young injury could be will certainly depend on how severe the diagnosis is and how well redshirt freshman backup QB Jalen Milroe performs. Coming into the contest, Milroe had attempted just 25 passes in his Alabama college career. But the former four-star recruit is the next man up for a reason.

Milroe immediately ran for a three-yard score on his first drive after replacing Young. Prior to the game, head coach Nick Saban revealed to the CBS broadcast that the offense with Milroe under center would represent a similar style to the one in use during Jalen Hurts‘ Alabama tenure. Which is to say, expect a lot more quarterback movement with Milroe looking to use his athletic abilities to his advantage. Of course, he had no idea that the Crimson Tide would have to rely on their backup coming into the game, but that’s exactly what happened after Young’s unfortunate incident.

Coach Saban revealed after the 49-26 win that Young is dealing with a shoulder sprain. A timetable to return is currently unknown but should come later in the week.

Albeit in limited action, Milroe held his own during the second half against the Razorbacks. In Young’s absence, Milroe completed 4-of-9 passes for 65 yards and a touchdown. Most impressive was what he added on the ground, as the backup QB picked up 91 yards and a touchdown on just six carries.

While the Crimson Tide hope to have their Heisman Trophy winner back on the field before long, Milroe did just enough on Saturday to help keep Alabama undefeated for one more weekend. A matchup next week against a top-ranked Texas A&M defense won’t get any easier. We’ll see who’s under center, but at least Milroe gives everyone a bit more confidence after a stellar performance in a less-than-ideal situation.