Los Angeles Rams defensive tackle Aaron Donald delivered an MVP-caliber performance in Super Bowl LVI, making the play that won the Lombardi Trophy. Now, the 30-year-old faces an even bigger moment with a decision that could dramatically change the Rams and the NFL.

Before Los Angeles faced the Cincinnati Bengals, news broke that Donald was contemplating retirement. If he won the Super Bowl, reports indicated it was a ‘strong possibility’ the three-time Defensive Player of the Year hung up his cleats.

Fans certainly felt more optimistic about the all-time great returning after the Super Bowl parade. Donald talked about ‘running it back‘ to hype up the crowd. Hours later, he revealed what the Rams need to do to get him back. 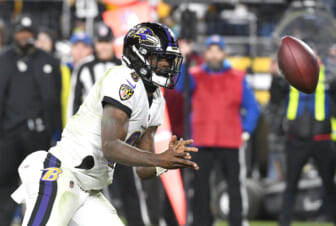 A week later, the possibility of retirement feels more real than ever. After just eight seasons in the NFL, one of the best defensive linemen ever is very seriously considering retirement.

Peter King of NBC Sports reported Monday that people close to the Rams and the All-Pro defensive tackle belief there is a 50-50 shot he retires. However, a decision isn’t imminent.

“Talking to some people close to Donald and the team, it sounds 50-50 on retirement. There will be time for that. Good for Donald taking his time to revel in the greatest game of his life. The man has been playing football for 25 years. Give him 25 days, 50, 75, to enjoy this.

There are certainly ways the Rams can try to influence his decision. Re-signing Odell Beckham Jr. and Von Miller, further committing to an all-in approach, would go a long way. Additionally, Los Angeles could offer him a contract extension that would make him the highest-paid defensive player in the NFL.

Related: How an Aaron Donald contract extension might look

However, this could all come down to health and personal time. Donald can walk away now with generational wealth already saved, a healthy body and a young family to spend all his time around. If he does retire, it means the best player in the NFL walks away and the Rams won’t be Super Bowl contenders in 2022.