We’re just weeks away from the start of NFL training camp. New York Giants fans are hopeful that the new regime of head coach Brian Daboll and general manager Joe Schoen can bring the franchise back to respectability after it’s gone 22-59 over the last five seasons.

It will take a collective team effort if New York is going to have any chance of having their first winning season since 2016. In particular, the Giants will need to have these five players play at a high level if they’re going to have success in 2022.

It’s now or never for the 25-year-old quarterback as the team declined his fifth-year option this spring. For the first time in his career, Daniel Jones must show that he can stay healthy and cut down on his turnovers.

Jones must play his football now only for the Giants to win, but he needs to play at a high level to hold off Tyrod Taylor from supplanting him as the starter.

With Barkley in the final year of his contract, it’s imperative that he have a bounce-back season. The last three seasons have been injury-riddled for the 2018 Offensive Rookie of the Year. But heading into camp he seems fully healed from his ACL tear in 2020, and on paper is playing behind the best offensive line of his career.

If he can resemble the player he was in 2018, he will thrive in Daboll’s and new offensive coordinator Mike Kafka’s offense. If he’s unable to get back on track, then it could be another long season for Big Blue.

There was optimism when the Giants signed Golladay to a four-year $72 million contract last offseason. The belief was that for the first time since they traded away Odell Beckham Jr, New York finally had a number one receiver.

Instead, Golladay fell woefully short of expectation as he had just 37 receptions for 521 yards and zero touchdowns. Some attribute Golladay’s lack of production due to poor play calling and that he may not have been fully healed from his hip injury that limited him to five games in 2020. 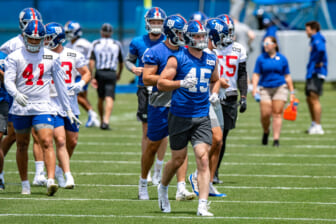 Now he’ll be relied on to be the Giants’ deep threat and come up with contested passes. With innovative offensive minds now on the Giants coaching staff, Golladay should come near or eclipse 1,000 receiving yards.

With the departure of James Bradberry, Jackson is now the Giants’ number one corner. In his first season with Big Blue last year, he struggled and only had one interception.

We’ll have to see how new defensive coordinator Don ‘Wink” Martindale utilizes Jackson, but you can expect that he’ll be matched up with opposing teams’ number one receiver often. He’ll need to hold his own and hopefully play a full season for the first time in 2018 if the Giants are going to slow down high-powered passing offenses.

The moment the Giants took Thibodeaux with the fifth pick in the draft, there was immediate excitement around the organization that he would turn their fortunes around.

With Thibodeaux and second-year edge rusher Azeez Ojulari, along with Leonard Williams, the pass rush should be more than formidable, and we should see a significant increase in New York’s sack total. 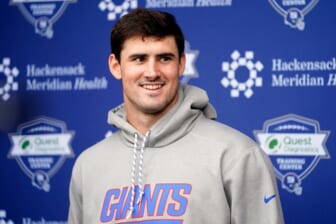 Over the past several seasons, there have been edge rushers taken in the top five in the draft such as Chase Young, along with Joey and Nick Bosa who have gone on to win Defensive Rookie of the Year. There will be an expectation for Thibodeaux to play at the level they played at, and to make an immediate impact.