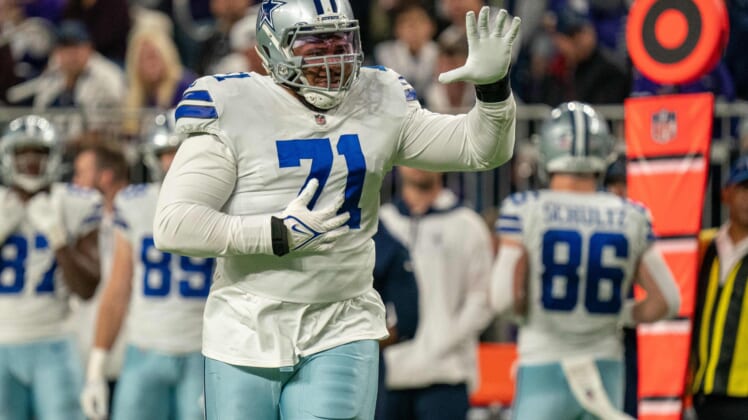 After a disappointing end to their season, the Dallas Cowboys are faced with a tough situation thanks to their lack of cap space. They’re already reportedly considering parting ways with Amari Cooper, and now they could be preparing to do what it takes to shed the contract of starting right tackle La’el Collins.

Collins is due $15.25 million in 2022 and the Cowboys currently have just over $3 million in available cap space. For this reason, the Cowboys may look to trade their talented lineman, and if they’re unable to find a trade partner, Collins could be released altogether, according to Pro Football Talk.

Yet, with the résumé Collins has put together, there’s likely to be plenty of interest in the 28-year-old tackle.

La’el Collins likely to be traded from Dallas Cowboys

According to Jordan Schultz, there are four teams who have interest in a La’el Collins trade. Those teams are the Jacksonville Jaguars, Denver Broncos, Miami Dolphins, and Cincinnati Bengals, in no particular order.

All four of the teams make sense as they look to protect their franchise quarterbacks going forward. They’re also all among the top-12 teams in salary cap space, which suggests fitting the salary of Collins under their cap should be a breeze.

Now it’s just about determining how much compensation the Cowboys are seeking for Collins, who has 71 starts in 74 career games since entering the NFL as an undrafted free agent back in 2015.

Collins is under contract with the Cowboys through the 2024 season. If Collins is moved this offseason, Terence Steele is expected to become the full-time starting right tackle on the line that protects Dak Prescott and paves the way for the dynamic duo of Ezekiel Elliott and Tony Pollard.