Once a player destined for greatness, Josh Gordon has been suspended from the NFL more than any other player in league history. At the same time, this dubious title also reflects how passionate Gordon is about playing football.

Several others have given up, walking away from the game that brought them fame. Not Gordon, he keeps coming back for more.

After six suspensions, the NFL announced Gordon is back yet again, reinstated, and immediately able to sign with any organization.

Selected in the second round by the Cleveland Browns in the 2012 Supplemental Draft, Gordon has battled several demons since entering the league as a 21-year old phenom who experienced immediate fame.

In his rookie year, Gordon racked up 805 receiving yards and five touchdown catches. But it was his second season that made him a legend of sorts.

Perhaps the craziest part about Gordon’s success was that he accomplished such numbers in just 14 games.

Keep in mind, this was with the Cleveland Browns in 2013. It was the Rob Chudzinski era. They went 4-12 led by Jason Campbell, Brandon Weeden, and three starts from Brian Hoyer.

Gordon shined bright, on a team full of turds, plus future Hall-of-Famer Joe Thomas. But it all went downhill from there, playing in just 33 out of a possible 112 regular-season games since 2013. 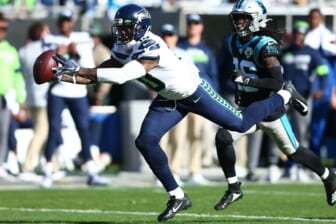 However, Gordon’s ready to put all his troubles behind him and start again. While Gordon is now 30, he doesn’t have much wear-and-tear on his body having been out of the league since 2019.

Here are three teams who shouldn’t hesitate to see how much the former star has left in the tank.

Russell Wilson has raved about his time working with Josh Gordon when they played five games together in 2019. It seems the two thoroughly enjoyed their time in Seattle. With the Seahawks still searching for a consistent third receiver behind stars Tyler Lockett and D.K. Metcalf, a reunion with Gordon shouldn’t be ruled out.

With the Seahawks, Gordon would be able to get right back into an atmosphere he’s familiar with, surrounded by people in his corner. Playing in a competitive NFC West could give Gordon a chance to get back to the playoffs. He did win a Super Bowl ring thanks to his time with the 2018 Patriots, but Gordon reportedly later sold it in an auction.

With Michael Thomas nursing an ankle injury, the New Orleans Saints have struggled to replace him. Through two games, no Saints player has more than 85 receiving yards. The 6-foot-3 Gordon could bring a much-needed field-stretching option for Jameis Winston to target downfield.

There’s no indication of how much Gordon can immediately bring to the table, but with veterans such as Ty Montgomery and Chris Hogan filling out the latter portion of the depth chart, it’s not like Gordon would be stealing opportunities from any younger, developing players. While the others may offer more on special teams, Gordon has more potential than either of them.

I mean, why not? Who wouldn’t want to see Josh Gordon paired with Patrick Mahomes? Watching Mahomes bomb balls 60 yards in the air to Tyreek Hill is very fun.

Over the past two years since he’s played, do you think Gordon has ever envisioned himself catching touchdown passes from Mahomes? Chances are, Gordon is like millions of others. The difference is, Gordon may actually be able to make it happen.