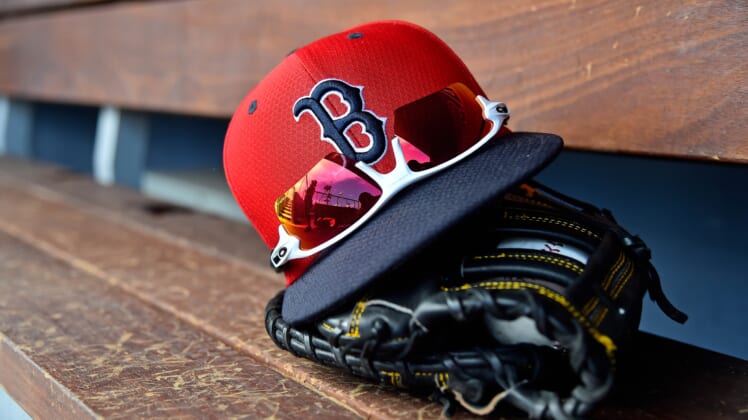 Mar 5, 2019; West Palm Beach, FL, USA; A detailed view of a Boston Red Sox cap, sunglasses and glove in the dugout during a spring training game between the Washington Nationals and the Boston Red Sox at FITTEAM Ballpark of the Palm Beaches. Mandatory Credit: Jasen Vinlove-USA TODAY Sports

The Boston Red Sox are one of the biggest surprises in 2021, sitting near the top of the MLB standings and demonstrating they are one of the best teams in baseball this year. With the trade deadline drawing closer, trade rumors are swirling about potential names on the move.

Boston hired Chaim Bloom for a reason and it wasn’t to take the all-in approach we saw from Dave Dombrowski. But while the Red Sox won’t be super aggressive on the trade market, depleting their farm system for win-now players, Bloom will find ways to improve this roster.

This is a team in an ideal situation. Both the New York Yankees and Toronto Blue Jays are struggling mightily. Meanwhile, the Tampa Bay Rays lost ace Tyler Glasnow for the regular season. The AL East is winnable, but it’s going to take a few moves for the Red Sox to legitimately compete for a World Series.

Let’s dive into three trades that would boost the Red Sox hopes of winning another championship.

Bobby Dalbec isn’t exactly living up to the hype that surrounded him coming off a strong showing in spring training. The 25-year-old carries a .214/.267/.432 slash line through 57 games this season, posting an ugly 87 OPS+ in nearly 200 at-bats. A big part of the problem, a .187 batting average and .374 SLG against right-handed pitchers.

Compare that to Jesus Aguilar, who also brings a personality that would fit into the clubhouse. Miami’s slugging first baseman is batting .268 against right-handed pitchers this season, posting a .480 SLG and a 123 sOPS+. Aguilar has 12 home runs on the season and as StatCast details, his power would play nicely at Fenway Park and Yankee Stadium.

Boston would owe him just a portion of the remaining $4.35 million salary for the 2021 season and he is arbitration-eligible for the final time this winter. As for the potential cost, Boston’s No. 15 prospect Brainer Bonaci and outfield prospect Juan Chacon may interest Miami.

Boston’s relief corps has been surprisingly effective this season, recording the ninth-lowest ERA (3.72) in baseball. It’s a credit to the likes of Adam Ottavino, Garrett Whitlock and Matt Barnes carrying this group. But additional reinforcements are crucial and we can’t ignore the climbing walk rate (11.2% in June) and FIP (4.96).

Fulmer, the 2016 AL Rookie of the Year winner and a 2017 All-Star selection, saw his career derailed by elbow and knee surgeries. He’s no longer a starting pitcher, but the 28-year-old righty is excellent out of the bullpen for the Detroit Tigers.

While he has run into some trouble as of late, Fulmer consistently shows the ability to miss bats and his .311 BABIP should come down. He is dominating left-handed batters this season, holding them to a .182/.239/.288 slash and is under contract through 2022. The Athletic’s Chad Jennings suggested Michael Chavis for Fulmer. Boston might have to throw in a flier prospect, such as Ceddanne Rafaela, but a deal is possible.

Building off our theme of Red Sox trade targets with multiple years of control, Merrill Kelly is a sleeper name at the MLB trade deadline. Arizona is the worst team in baseball and will be looking to shop almost anyone that rival clubs inquire about.

Kelly is owed $4.25 million this season, a reasonable salary for a back-end starter. More importantly for the Red Sox, there is a 2022 club option for $5.25 million. Given that’s a cheaper option for 2022 than Martin Perez ($6 million club option), this fit makes even more sense.

Put right-handed pitching prospect Brayan Bello and No. 24 prospect Hudson Potts in a package, the Boston Red Sox could add significant depth to their rotation for the stretch run.