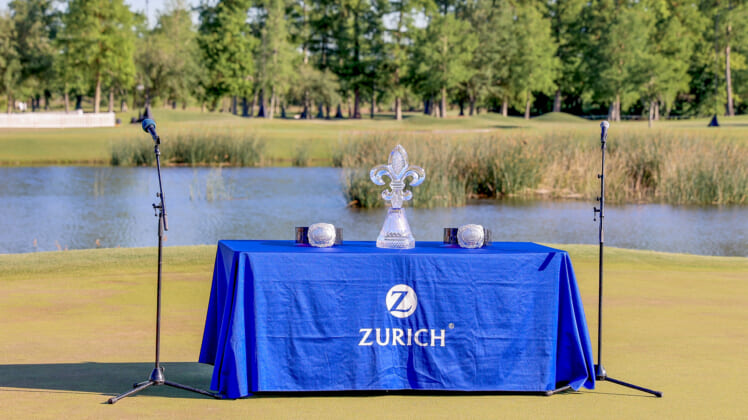 Two weeks after the Masters Tournament, the Zurich Classic takes place as players team up with one another in different formats to eventually determine a winner.

In rounds one and three on Thursday and Saturday, teams will play best ball. Best ball format is when both players play the hole as is and the player with the lowest score on the hole between the two competitors is recorded on the scorecard.

In rounds two and four on Friday and Sunday, teams will play alternate shot, meaning one player will hit the tee shot and the second player hits the second shot and so forth through the completion of the hole.

There are 80 two-man teams that make up the tournament field as players get to choose their teammate, as long as they have some type of PGA Tour status or a sponsor exemption.

As a result, it is common to see some the game’s top players team up and even friends come together for the once-a-year team event.

For example, the World No. 2 and 5 players are teaming up in Collin Morikawa and Viktor Hovland this week.

In addition, the World No. 4 and 12 players in Patrick Cantlay and Xander Schauffele are also coming together this week.

Some teams, including Cantlay and Schauffele, have experience playing together on team events in other tournaments, such as a Presidents Cup or a Ryder Cup.

Cantlay, who is competing in his fifth Zurich Classic, said playing with a competitor with prior experience is beneficial and enjoyable for this week.

“Xander and I are great friends, and we play a lot of golf together,” Cantlay said Tuesday. Between Presidents Cups and Ryder Cups, quite a few team events given our short tenures on tour, we really enjoy it and when we see on the schedule, it sounds like a fun week and a week that we can compete.”

Patrick Cantlay on his friendship with Xander Schauffele

As a result of playing individual events, playing a team tournament, such as the Zurich Classic that features best ball and alternate formats, give competitors an opportunity to have a different mindset compared to a regular event.

By playing with a second player, it also means having a second caddie in addition to the team members of that golfer.

Related: Golfers with the most PGA Tour Wins

Schauffele said with an extraordinary opportunity to win alongside someone, in addition to someone with previous experience like Cantlay, it is a unique chance to get a PGA Tour victory.

“Yeah, it’s rare to share success in golf, so if I could do it with someone out here, I would love to do it with Pat,” Schuaffele said. “We’re normally playing against each other every week and as close as we are as friends, we want to beat each other more than anyone else. So, it’s cool if we can share some success this week.”

Schauffele and Cantlay have been named to Presidents Cups and Ryder Cups over the last few years and have even been a go-to pair for the team captain in best ball formats.

However, the 30-year-old golfer, who lost in a playoff last week at the RBC Heritage, said the preparation for this week’s event at TPC Louisiana is nothing like a Presidents Cup or a Ryder Cup.

“If anything, I think it’s very slight,” Cantlay said of the comparison. “Being stroke play this week, it changes it, plus those weeks are even way different than a week like this. In the years I’ve played this tournament, this tournament feels more like a regular tournament than it feels like a Presidents Cup or Ryder Cup. It’s a totally different animal when you play those big team match play events.”