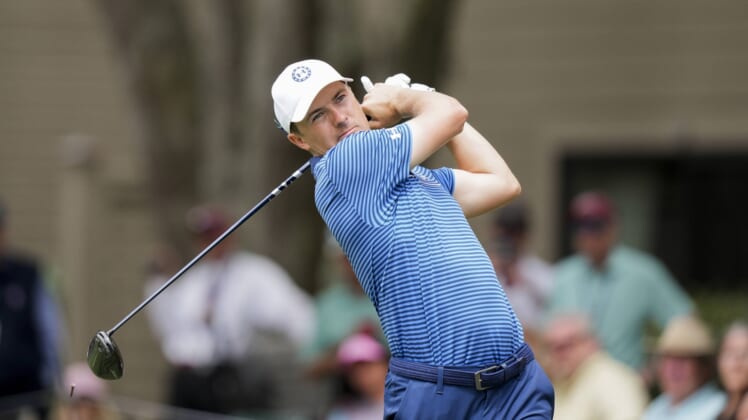 It was the three-time major champion’s first victory in 12 1/2 months. He won on Easter Sunday for the second straight year after securing his last title at the 2021 Texas Open.

The victory Sunday came after Spieth shot a 5-under 66 that featured two eagles on the front nine and a birdie at his 72nd hole at Harbour Town Golf Links, which pushed him to a 13-under 271 while several groups behind him were still on the course.

“I was inside, and I can’t stand watching golf when you’re trying to dodge made putts because these guys are so good,” said Spieth, who started the day three shots off the pace. “Every single putt looks like it’s going in. It was just way more nerve-racking than actually playing.”

The only man to match him was Cantlay, the reigning FedEx Cup champion. Cantlay sank a 9-foot birdie putt at the par-3 17th to reach 13 under and missed a go-ahead birdie try at the par-4 18th, adding up to a final-round 68.

Spieth and Cantlay replayed the 18th, and both landed in a green-front bunker on their second shots. But Spieth stuck his sand shot 7 inches away from the cup for a tap-in par, while Cantlay had a plugged ball and hit his shot to the far end of the green before failing to save par.

“Same number as in regulation and hit a similar shot with the same club,” Cantlay said of his approach. “It obviously caught a different wind than what I was expecting. The wind was supposed to be off the right. If anything, a little down, and I must have caught a little burst. Obviously with it plugged like that, it’s darn near impossible to get it close.”

Spieth got off and running when he holed out from a greenside bunker at the par-5 second. His other eagle came by virtue of a nearly 24-foot putt at the par-5 fifth. He also had two bogeys and three birdies, including a 10-foot putt on No. 18 to reach 13 under.

It was Spieth’s 13th career PGA Tour win, and it came one week after he missed the cut at the Masters for the first time. He had slipped to 20th in the Official World Golf Ranking entering the week.

“It’s a bit of a surprise,” Spieth said of his victory. “I definitely felt like I was putting myself in the position hole-to-hole this week to win a golf tournament, and I just was having a hard time early in the week adjusting to the speed differences from last week. Then the hole started to look small to me yesterday, and then I just came out today and said I’m not going to leave one putt short.

“And if they miss, they miss, and just try to be a little bit more aggressive, and made just enough to cap it and win.”

Seven players tied for third at 12 under, among them Harold Varner III and Ireland’s Shane Lowry, who played in the final pairing of the day. Varner led the tournament by one shot after 54 holes, but he parred all nine holes on the back nine Sunday and carded a 1-under 70.

Lowry strung together three birdies at holes 4-6 and reached 14 under to hold the lead by himself for a time. But after a wayward tee shot at the par-3 14th, his recovery attempt found the water and he made double bogey. After missing birdie putts at Nos. 16 and 17 that would have drawn him even with Spieth, he finished with a 69.

England’s Tommy Fleetwood (68) and South Africa’s Erik van Rooyen (70) tied for 10th at 11 under. With four birdies in a row at the second through fifth holes, van Rooyen surged to the lead at 14 under, but a series of misplayed shots on the back nine led to four bogeys that took him out of contention.