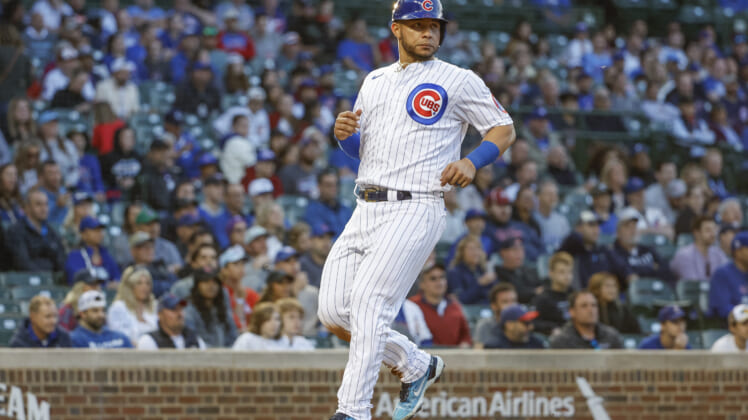 While the Chicago Cubs sit near the bottom of the MLB standings, All-Star catcher Willson Contreras is enjoying a phenomenal season that is boosting his trade value and his asking price in free agency next winter.

Contreras, age, 30, is one of the lone bright spots in the Cubs lineup. Entering play on Friday, he boasted a career-high .403 OBP and is well on pace to shatter his personal bests in home runs and runs scored with a phenomenal 2022 season.

According to Jon Heyman of the New York Post, Contreras will likely want a five-year contract this offseason worth at least $100 million. At an annual value of $20-plus million per season, Contreras would become one of the highest paid catchers in MLB.

In a contract year, the right-handed catcher is taking his game to another level. He lowered his strikeout rate from a career-worst 28.5% in 2021 to a career-best 19.9% this season, all while increasing his walk rate to 11.9%.

It’s not the only improvement made by the two-time All-Star selection. Contreras is also hitting the ball harder, per Baseball Savant, with a 99th percentile Hard Hit rate, an 86th percentile Barrel rate and a 97th percentile average exit velocity.

With the Cubs not close to challenging for the MLB playoffs, history will likely repeat. Just as Chicago did last year with impending free agents Javier Baez, Kris Bryant and Anthony Rizzo, Contreras is expected to be traded this summer.

A breakout season certainly influences the potential return the Chicago Cubs will receive in a Willson Contreras trade. There is also going to be a strong market for his services, likely including the San Francisco Giants.

However, as the Cubs experienced last year, returns are limited for half-season rentals. It is even more true this year with the MLB trade deadline set for Aug. 2, meaning an even shorter rental for the team acquiring his services.

There’s another factor working against Contreras. With teams placing more value on the defensive impact a catcher makes behind the plate, the weak point of Contreras’ skills comes into play. He ranks in the 18th percentile for pitch framing and ranks 33rd among catchers with 150-plus innings in FanGraphs’ Defensive Rating (0.6).

Realistically, this means a team like the Giants, New York Yankees or Houston Astros won’t move a top prospect for Contreras. San Francisco might want to build a trade package around outfield prospect Jairo Pomares and catcher Patrick Bailey, with that package worth 16.7 points compared to Contreras’ 13.7 by BaseballTradeValues.com.